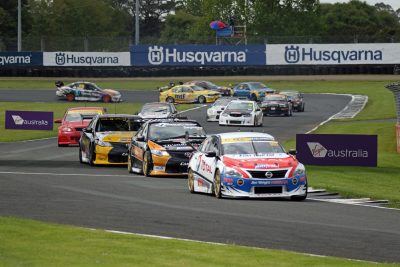 A bumper 22-car field will hit the track for the final round of the BNT V8s championship at Hampton Downs this weekend.

Two championship titles will be decided by the end of racing on Sunday afternoon where the points battle in both class one and two is incredibly tight, three drivers in each class vying for the top spot of the table.

Class one is lead by Andre Heimgartner in his Richards Team Motorsport Toyota Camry with 998 points. Just 69 points behind on 929 is his teammate, Australian Jason Bargwanna, with Nick Ross a further 45 points behind in his Nissan Altima.

Also contesting the class one field are a trio of Holden Commodores from Lance Hughes, Jack Smith and Matt Tubbs, while Brad Lathrope will again campaign his Ford Falcon. Also look to see the Toyota Camry of Scott Taylor who has been recovering from a back injury. If Taylors back isn’t up to the task, Kiwi Craig Baird will take the wheel for the weekend.

In class two, Liam MacDonald holds a slim lead of just 12 points over Chelsea Herbert. Only 49 points behind Herbert is Brock Timperley who is enjoying some late season form having won races at the last two rounds, including a clean sweep at Manfeild.

Bolstering the class two field will be Justin Ashwell, Nick Farrier, Rob Wallace and Matt Podjursky. All three capable of taking a race win out from under the noses of the championship contenders.

BNT V8s Category manager Gary Lathrope says that the series has been working steadily on providing a formula for eligible V8 cars to compete in the championship on more of a full time basis.

“We realise there are a number of cars capable of competing in our championship currently running in other categories,” says Lathrope.

“We have been working on a formula that makes it more simple for these competitors and cars to run with us in the future.”

“But for this weekend, we feel fans will enjoy a strong field of V8s taking to the Hampton Downs circuit.”

The BNT V8s will have one race on Saturday, followed by two races on Sunday to complete the season.