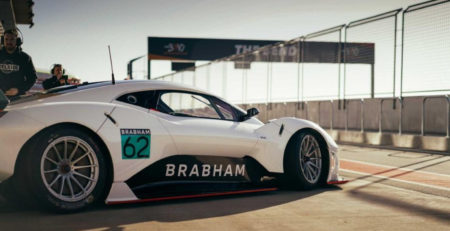 Brabham Automotive will return to defend their title as a stunning array of 76 cars assemble for The Bend Classic this weekend at The Bend Motorsport Park.

The second annual Classic has more doubled the field seen at the inaugural event last year, despite border closures and travel restrictions due to the COVID-19 pandemic ensuring the field remains entirely South Australian.

Spread across six classes, competitors will tackle a series of sprint sessions, competing against the clock, on Saturday and Sunday this weekend.

The event will culminate on Sunday afternoon with a single-car shootout for the 10 fastest cars of the entire event.

Several demonstration sessions will also feature with rare, exotic machine to take to the track including the Porsche 911 GT1, McLaren Senna and more cars yet to be unveiled.

South Australian Josh Kean will drive the Brabham this year, splitting his time between the South Australian-built Supercar and a Footwork Arrows FA15 Formula 1 car.

“The 2020 Classic will showcase arguably the largest variety of racing cars ever gathered at the circuit,” said The Bend’s Marketing Manager, Michael Rossi.

“We’re thrilled with the reaction from South Australian competitors who have embraced the event and efforts to get cars out from hibernation and onto the circuit.”

The Vintage group includes the oldest car ever to take to The Bend Motorsport Park, a 1919 Dodge Speedster, amidst a host of historic vehicles from the early 1900s through to the end of the 1950s.

Highlights are likely to include a 1934 Lycoming Indy Car, several Adelaide-built Elfin specials and a Bugatti Type 37A Grand Prix car – built from original Bugatti machines that tackled the Australian Grand Prix in the period.

The Open Sports and Racing group features a broad spread of open wheel and Sports Cars, including a stunning Le Mans Lola T70 (powered by a Ferrari V12) a 1970 Brabham BT29 and a Lola T590, amongst others.

A group of 12 Historic Sports Sedans showcases the strength of classic tin-top racing in Australia, with cars from the 1950s through 1980s included. Whiteline Racing’s Chevrolet Monte Carlo NASCAR will also run amidst the Sports Sedan group – set to be one of the best sounding collections out of the entire event.

Nine pure open wheel cars will fill the fourth group of cars, eight of them with Grand Prix history.

Four cars have genuine Australian Grand Prix history in Adelaide, while a Brabham BT26 to be driven by Chris Kean was once raced by the legendary Sir Jack Brabham, prior to being sold to Frank Williams as he embarked on his historic Formula 1 journey.

Two F5000s – one a Lola and one an Elfin – are also entered and each has Grand Prix history: The Elfin having finished third in the 1980 AGP at Calder Park in the hands of Didier Pironi.

Several other Formula 1 cars will be on display at the venue, making the largest collection of Grand Prix machinery seen on track in Australia this year.

The sixth and final group of cars, dubbed Classic Production, will see classic Road and Race cars from the 60s and 70s on track; including several Alfa Romeo’s, A V12 Jaguar E-Type and Aston Martin DB6.

Entry is free for spectators on each day of the September 5-6 event.