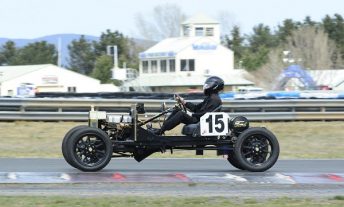 As with the inaugural meeting in 2016, the event was one of the best-attended of the year, with spectators flocking from all over the region and interstate to attend.

Patrons enjoyed static displays off the track, and were able to gain up-close views of an assortment of pre-1961 cars and motorcycles. The large gathering of competitors also enjoyed the chance to socialise with their peers, attending a social function in the Wakefield Park Café on Saturday night and swapping stories of racing memories from years gone by.

But while the atmosphere off the track was relaxed and friendly, the intensity lifted considerably when it came to on-track competition.

The racing cars were divided into groups based on their lap times and the contests for outright victory were intense across the weekend, with several races decided by less than a second. A particular point of interest for both competitors and spectators were the handicap races, in which the slower cars received a head start, providing the faster cars with the challenge of catching and passing them before the finish.

Barry Bates (Thompson Special) won the first Group B race but was overtaken by Mike Gosbell (1957 Sabakat Lotus) in Race 2.

Leslie Wright (1958 Dalro Jaguar) and David Reid (1959 Faux Pas) staged a couple of absolutely thrilling battles in the first two Group C races, scoring a win each and crossing the line less than half a second apart.

Groups B and C were combined for Sunday’s handicap races, with Greg Mackie (1959 Cooper Porsche) and Max Pegram (1960 Gemini Ford) each taking a win.

The racing action concluded with a “butcher’s picnic” race in which cars from all three groups were combined, Mackie again taking the win from Brian Simpson (Cooper Jap Mk9) and Shane Bowden (1958 Prad 5 Sports).

For those not wishing to become involved in the cut-and-thrust of wheel-to-wheel competition, there were also regularity sessions – where competitors are required to nominate a lap time and lap as close to that time as possible – for pre-war and post-war cars.

In the motorcycles, it was Keith Campbell who dominated the solos, winning in two separate classes.

The weekend’s activities also included a total of five races for sidecars – the first two races featured a progressive grid format, and the Bryce Davies/Brett Gilbert combination took victory in both aboard their 1937 Rudge Special, ahead of Warren Johnson/Lionel Cornwell (1962 BSA A65) and Mick Large/Tim Large (1960 Triumph).

The remaining three races used a handicap format; David Dickie and Scott Freeman won the first handicap event on their 1958 Triumph, before Dave Large/Geoff Neil (1954 Triumph) prevailed in the final. Both the Davies/Gilbert and Johnson/Cornwell entries retired with mechanical problems and were forced out of the last two events.