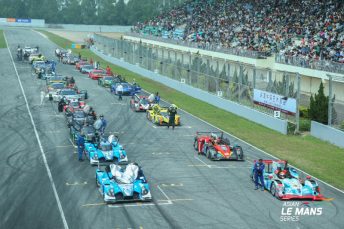 The 2017/18 Asian Le Mans Series is set to be broadcast to a record TV audience, reaching all corners of the globe, with a particular emphasis on their local Asia Pacific region.

The preliminary list shows the coverage will be broadcast through at least 18 networks, in around 100 countries as far reaching the USA, Mexico, Europe, and Australia.

In Asia, the 2017/18 season will be broadcast on the Fox, beIN Sports, Le Sport and Eleven Sports networks, along with on Star Sports. These networks feature an extensive reach including China, Hong Kong, Indonesia, Korea, Malaysia, Singapore, Thailand, Taiwan, Australia and New Zealand.

With over a month until the first round it is expected that this list will continue to grow, delivering even great reach than the record breaking season in 2016/17.

This announcement comes hot on the heels of the announcement of Tencent, the leading internet service company in China, as a key media partner for the season, which will deliver a significant audience in China.

The extensive coverage the Series will receive clearly positions it as the premier endurance series in the region.

The 2016/17 season was broadcast to a record audience with a package of highlights programmes reaching 145 countries with 524 hours of TV on 29 networks (some 663 individual broadcasts) across the Asia Pacific region and beyond.

In addition there is set to be full live online streaming for the 2017/18 season through the Series website and social media.