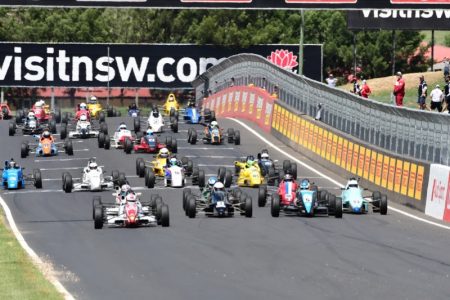 The celebrations for the 50th anniversary of Formula Ford in Australia have started this weekend at Bathurst during the 2019 Liqui Moly Bathurst 12 Hour event.

Over 50 cars from all over the country competed during the event in four different classes:

Factory Listec driver Josh Buchan finished first in the Open Class after placing his Listec WIL-05k on pole and winning two races on Thursday and Friday.

Buchan ended up second in race three, after a hard-fought battle with Richard Davison, while British driver Thomas Hamlett pinched the win in a Fastlane prepared Stealth. One of the weekend’s favourites, Anglo Motor Sport driver and 2018 Australian F4 Champion Jayden Ojeda, hit the outside wall on the exit of Forest Elbow while fighting with Hamlett for the win, and was forced to park his Spirit K08 on the side of Conrod Straight.

Fastlane Racing drivers Thomas Hamlett and Austin Pearson completed the podium in the Open class, aboard their Stealth RF93 and Van Diemen RF01.

The Fc Class was won by Richard Davison, who was driving his Van Diemen RF89 prepared by Ellery Motorsport. Throughout the weekend, Davison enjoyed some wheel-to-wheel racing with the youngsters at the front of the field, with 5th place in qualifying being his worst result of the weekend.

Victorian Ewan Geals finished second in the Fb class, driving his beautiful Lola T644, and Western Australian Simon Matthews completed the podium in the class in his Royale RP29.

Regular NSW historic formula ford competitor Garry Watson dominated the Fa class, finishing all weekend in the outright top ten aboard his over 40-year-old Mawer. Watson impressed once again with his speed and confidence around the Mountain.

John Tarran’s Lotus 61 was one of the oldest cars in the field and driven beautifully to a second position in the Fa class. Jacob Bonisch’s immaculate Crossle 32F rounded out the podium in the Fa class.

LMP1 driver and Le Mans podium finisher Mathias Beche, who was fighting for the outright win during race one, had to miss the last two races of the weekend due to his commitments in the 2019 Liqui Moly Bathurst 12 Hour. The Swiss was replacing British Formula Ford runner-up and USF2000 Shootout contender Michael Eastwell aboard the Ellery Motorsport Spectrum 010, after Eastwell withdrew due to illness.

The participation of the category to the 2019 Liqui Moly Bathurst 12 Hour event was only the beginning of the 50th anniversary celebrations that will be held all around the country this year.

The 2019 Australian Formula Ford Championship will start on April 5-7 at Sydney Motorsport Park.