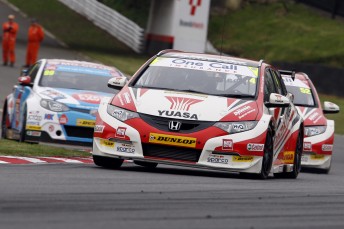 Honda Yuasa Racing team-mates Matt Neal and Gordon Shedden are in optimistic mood ahead of the Dunlop MSA British Touring Car Championship’s visit to Donington Park this weekend (19-20 April), confident the circuit will play to the Civic Tourer’s strengths.

Honda currently leads both the manufacturers’ and teams’ standings in the BTCC following a superb debut for the new Civic Tourer race car in the Brands Hatch curtain-raiser at the end of March. Between them, Neal and Shedden tallied a trio of podiums and a sextet of top six finishes, placing the former second in the drivers’ points table and the latter close behind in fourth.

The second outing of what is already shaping up to be a fiercely-competitive campaign – the top 23 drivers in qualifying at Brands Hatch were all blanketed by less than a second – will take place at Donington over Easter weekend, and another thriller looks in-store.

The popular Leicestershire circuit has been a happy hunting-ground for Honda in recent seasons – with at least one race triumph there every year since 2009 – and Neal in particular has fond memories.

In addition to being his ‘home’ track, the three-time BTCC Champion made history there in 1999 as the first Independent driver to claim an outright victory – and the £250,000 prize cheque that accompanied it. Last year, Neal celebrated his milestone 500th start in the series at Donington with a brace of rostrum finishes, and he is hopeful of being able to spray more podium champagne this weekend.

“I have a lot of special memories of Donington Park,” he acknowledged. “It was where I took my first BTCC win, which really set me on my way, plus of course it’s my local circuit. It invariably attracts huge numbers of fans who all create a great atmosphere, and the racing always seems to be good as well! It’s a circuit like no other to be honest, with very different characteristics, so I’m really looking forward to the weekend.

“I was dead chuffed after Brands Hatch. Ok, we didn’t get the win, which would have been the perfect scenario, but to score three podiums as a team was brilliant, particularly when you consider it was the first event for our new Civic Tourer and the level of competition in the field this year.

“We’re still learning the car, of course, and it has taken some adjustment to my driving style, too, as there are a few little tricky things where the Civic Tourer behaves differently from the hatchback. It certainly keeps you on your toes, but it was a really great first weekend and the car will only get better.”

Neal points out that success ballast from Brands Hatch will likely impact upon the qualifying pecking-order at Donington, and Shedden agrees that given the sheer strength-in-depth of the BTCC field in 2014, a flawlessSaturday afternoon could prove pivotal to race day prospects.

“The key for us at Brands Hatch was to get some solid points on the board, especially given my previous record there,” revealed ‘Flash’. “Last year, I left 37 points off the lead of the championship, and the year before, I had been more than 40 points adrift. This year is the closest I’ve ever been to the top of the table after the opening round, which bodes well for the rest of the season.

“The nature of Donington Park and its corners should hopefully suit the Civic Tourer a little bit better than Brands Indy. It’s one of my favourite circuits – quick and flowing, with good undulation. It’s a real old-school track, and one that Honda has performed pretty well at over the past few years – so long may that continue.

“There’s no reason to think qualifying won’t be every bit as close as it was at Brands Hatch, and you could easily find yourself back on the sixth row of the grid rather than the front row without doing very much wrong – but I’m confident we will be up at the sharp end again.”

“We are feeling positive ahead of Donington Park and hopeful of enjoying a good run,” concurred Honda Yuasa Racing Team Manager Peter Crolla. “We are keen to carry our momentum on, and in that vein, we will be adopting exactly the same approach of targeting consistent points scores in every race.

“Right from our initial laps with the Civic Tourer, it has always been well-suited to long, fast corners, and we think Donington could be the first circuit we go to this year where we will really be able to exploit that. From pre-season testing, we would like to think we’ve established a reasonable set-up going into the weekend, and we will be ready for whatever comes our way.”

As added entertainment to the high-octane BTCC thrills n’ spills, Honda will be bringing its extraordinary Mean Mower to Donington to lap the circuit during the Sundaylunch break. Designed and built by Honda’s BTCC partner Team Dynamics and benefitting from feedback from both Neal and Shedden, the Mean Mower recently broke the world speed record for a lawn mower by averaging an astonishing 116mph at the IDIADA Proving Ground in Spain.