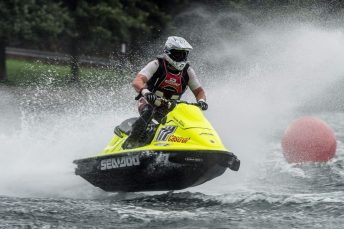 After 16 years away from Jet Sport racing, where he previously won no fewer than four British Championship titles, the European Championship and secured a top six finish in the Pro Modified World Championship, Belcher made a one-off return to the sport for charity last September.

Competing in the final round of the 2016 British Championship at Doncaster Lakeside, the Swindon sportsman raised almost £5,000 for Cancer Research and produced a series of strong performances in the 2-stroke Open Class to finish an impressive fifth overall.

Now, Belcher will ride in selected British Championship Jet Sport events this year which avoid clashes with the BTCC dates and his commitments with Handy Motorsport. He will pilot a 350hp supercharged Yamaha GP1800RS, prepared by Dean’s Team Factory Yamaha in the USA.

“I have raced every year for the last 24 years and while I am focused on continuing to build up Handy Motorsport’s touring car operation above all else, I still need to get my own fix of adrenaline”, said Belcher, “I am really looking forward to riding the Dean’s Team Yamaha GP1800RS. It will be my first time racing a 4-stroke supercharged machine, and I am looking forward to the challenge.”

Despite the huge success Belcher enjoyed on the British and international stage during his past career in Jet Sport racing, those halcyon days were a long time ago and, at the age of 43, he is the first to acknowledge the huge physical challenge he will face against much younger competition – such as 11-time World Champion James Bushell, aboard his 158 Performance Sea Doo.

“It’s definitely going to be a huge test physically, Jet Sport racing is extremely demanding and most of the competition have a few years on me that’s for sure”, added Belcher, “This is a great opportunity though and will satisfy my competitive urge while I’m not behind the wheel myself in the BTCC.”

Dustin Charrier from Dean’s Team Factory Yamaha, which has won more than 30 World and National titles in Jet Sport racing, commented: “We are excited to work with Simon in his comeback to the Jet Sport racing world and we’re sure he’ll have what it takes to jump back to the top. We’re looking forward to adding Simon and the British Series to the list of racers representing Dean’s Team internationally that includes Dubai, Indonesia, Thailand, and Cayman.”