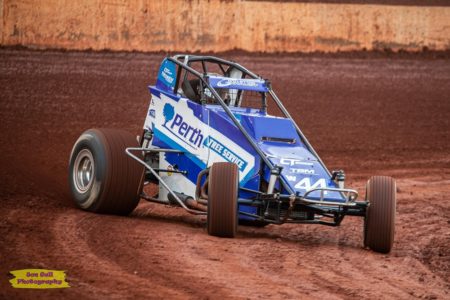 The Australian Championship is without a doubt the biggest Wingless Sprint event on the 2019-20 season calendar, and for Tyson Bryden, he managed to pick up a top-10 finish in last weekend’s running of the event at Kalgoorlie International Speedway.

With the Australian Championship being held in his home state and his one and only previous visit to Kalgoorlie International Speedway resulting in a third-place finish in last season’s Western Australian Title, Bryden headed into the event with his confidence high.

Bryden, from the Perth, Western Australia suburb of Rockingham, throughout the Australian Championship weekend was within the top-10 runners, after he finished sixth in the preliminary feature race on the Saturday night and heading into Sunday night’s second and final night sat sixth in the overall point standings. By the time Sunday night’s feature race came around, Bryden started from position eight and at the completion of the 40-lap event brought it home in 10th place.

“My goal heading into the Australian Championship weekend was to be one of the leading Western Australian cars, so to achieve that is something I’m very proud of,” said the 26-year-old racer, who when the last time an Australian Wingless Sprint Championship was held in his state, back in the 2013-14 season at Bunbury Speedway, he finished in fifth.

“I can’t thank my pit crew and all of my valued sponsors enough for all of their support and it was pleasing to be able to come away from the Australian Championship with a strong result.”

Following the second Australian Championship top-10 finish of his eight-season career in Wingless Sprints, Bryden and his team are now heading over to the east coast for the very first time. They will be contesting this Saturday night’s $10,000 to win third and final Super Series round at Murray Bridge Speedway (SA) and then the South Australian Title at Mount Gambier’s Borderline Speedway (SA) a fortnight later (Friday and Saturday night of March 20 and 21). It’s hopeful that they can also run the Victorian Title at Warrnambool’s Premier Speedway on March 27 and 28.

“I’m really looking forward getting over to the east coast and seeing how we go up against the tough east coast competition on their tracks,” enthused the WA # 44 Perth Tree Service supported KPC racer.

“It’s certainly not going to be easy, but I have set my goal of trying to qualify directly into the feature races each night and then just taking everything from there.”