Bryan Staring to race for Kawasaki BCperformance in 2018 ASBK Championship

Bryan Staring to race for Kawasaki BCperformance in 2018 ASBK Championship 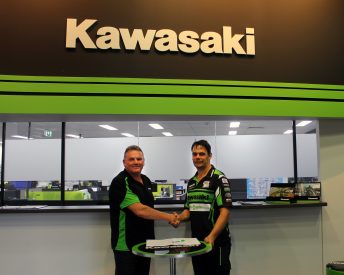 Following a stint on the world stage in the World Superbike (WSBK) Superstock class, Staring returned home to Australian racing in 2017. Having acclimatised himself to domestic racing and gearing up with the elite Kawasaki Ninja ZX-10R, Staring is poised for championship success.

“I’m wrapped to be racing with the Kawasaki BCperformance Racing Team for 2018. Team Manager, Kelvin Reilly displayed his professionalism throughout 2017, showing that both BCperformance and Kawasaki are very competitive,” commented Staring.

“Since 2011, I have gained a lot of experience with the Kawasaki Ninja ZX-10R across many different championships around the world and I look forward to partnering with Kawasaki again to take on the ASBK championship with the BCperformance team,” Staring said.

Arguably the most successful rookie in the YMI Superbike class this year, Kyle Buckley has re-signed with the team for the upcoming season.

“I’m extremely excited to be able to race the Ninja ZX-10R for another year with Kawasaki BCperformance. 2017 wasn’t a year of great luck for me and I am very thankful to Kelvin and Kawasaki Motors for keeping their faith in me,” commented the modest 21-year-old from Queensland.

“I feel that with this year’s experience, I will be able to get the ball rolling straight away and I can’t wait for the first test!”

Team Manager, Kelvin Reilly has been campaigning with Kawasaki machinery in Australia since 2012. Kelvin draws from years of experience as a rider in the British Superbike championship where he was lining up with the likes of now Kawasaki World Superbike champions, Tom Sykes and Jonathan Rea.

“With a big thanks to Kawasaki Motors Australia, I am looking forward to another year in the 2018 ASBK championship and I am really pleased to have Bryan Staring on our Kawasaki Ninja ZX-10R for the 2018 season,” Reilly commented.

“Bryan showed good speed this year and I believe with his experience we will be a real title threat from the start. Kyle Buckley stays for a second season in the Superbike class and during the first three rounds last season he showed great potential by being consistent and top rookie until a leg injury mid-season that put an end to his progress. I’m looking forward to watching his development during his second year on a Kawasaki Ninja ZX-10R.

“With both riders we have a really positive pairing for 2018 and a mixture of experience and youth. I would like to thank Robbie Bugden for his efforts during the past two seasons and I wish him all the best with his next move, although I’m pretty sure we will be seeing him in our pit garage during 2018! It’s a pleasure to be working with the same team of mechanics, the great team behind Kawasaki Motors Australia and our sponsors,” Reilly finished.

Kawasaki Motors Australia National Sales and Marketing Manager, Robert Walker showed great enthusiasm about the renewed team partnership and addition of Staring, saying, “Obviously there is a significant history between Bryan Staring and Kawasaki, so we trust that he will settle in and kick some goals with the Kawasaki BCperformance Racing Team next year.

“Kyle Buckley has been a strong contender as well so we are glad to be backing him through the team which will be our largest supported effort in the ASBK Championship. The combination of a proficient racing team and top-level riders makes the perfect recipe for success in 2018,” Walker finished.

The team will look to set the pace at Round 1 of ASBK, which will take place at Phillip Island, Victoria in support of the first 2018 WSBK Championship round from 22-25 February 2018.