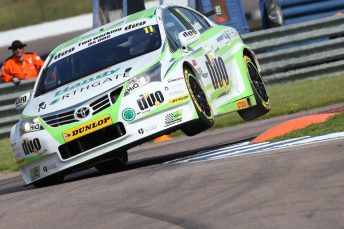 Beginning raceday at Rockingham on cloud nine after officially announcing – live on ITV4 – the team’s new-for-2018 partnership with the Alfa Romeo Dealer Council to run an Alfa Romeo Giulietta in the BTCC from next season, the event’s three subsequent encounters were exasperating.

Following the previous outing at Knockhill in Scotland a fortnight ago, where the Swindon squad identified a lingering issue with the differential on Austin’s No.11 Toyota Avensis, the team headed to Rockingham determined to get its season properly back on track – but it wasn’t to be.

Qualifying didn’t go at all to plan with some set-up issues and a damaged brake caliper, so Austin had to settle for 23rd on the grid. After sustaining a puncture in round 22 as a result of contact, another puncture in round 23 again cost any hopes of a push towards the points. Race two was doubly frustrating as, after pitting for a replacement tyre, Austin posted the eighth fastest race lap.

In round 24, the Evesham driver faced a major challenge from near the back of the grid with the ‘Hard’ compound option tyre and he ultimately retired with just a couple of laps to go as a result of a developing misfire.

“From my point of view, there wasn’t a lot more I could have done this weekend”, said Austin, “Ever since the contact at Snetterton, we’ve watched our championship challenge fall apart really and it’s heart-breaking to see all that hard work go to waste through no fault of our own.

“With our good news announcing the Alfa deal we wanted to put on a good show, but we had issue after issue again this weekend. Punctures in two races and then a misfire underlines what a tough weekend it’s been for the whole team.”

Ending opening free practice on Saturday morning inside the top 10, within 0.7 seconds of the outright pace at that point, Austin went on to conclude session two with roughly the same gap to the front. In the all-important qualifying session the Duo and Northgate-backed Toyota again ended up 0.7 seconds shy of the top of the times, Austin’s best lap a time of 1m23.976 seconds.

Set to begin the first of Sunday’s races from 23rd on the grid, the Handy racer actually started an elevated 22nd due to problems on the formation lap for Tom Ingram’s Toyota. Making a great start, Austin threaded his way neatly and safely through Turn One and Deene Hairpin and moved up into the top 20 but at Yentwood as the pack bottled up under braking he was hit heavily from behind.

Continuing nonetheless, by lap four the dislodged bodywork on the right-rear of the car began to rub more and more on the tyre and in order to avoid a potential blow-out Austin pitted. After the Handy mechanics swiftly fitted a new wheel and tyre, Austin rejoined a lap down and finished a vexing 31st.

Beginning round 23 last-but-one on the grid after the race one dramas, Austin made a storming start from partway around Turn Four of the oval banking and picked off cars hand over fist through Turn One and into the infield section to climb into 23rd position – a gain of no fewer than eight places.

Smartly positioning himself to the outside into Deene on lap two as the pack jostled, Austin moved up into 22nd place but the next time around at the hairpin he was tagged by Gordon Shedden. Fortunately recovering the resulting slide, Austin continued and moved into 21st before the appearance of the Safety Car on lap four.

Racing resumed on lap six with Austin in an elevated 20th spot, the Audi of Ant Whorton-Eales having visited the pits, but on lap seven as he rounded Gracelands and headed into the Tarzan hairpin Austin felt something wrong with the car. Along School Straight and into the braking zone for Brook Chicane, he realised another puncture had occurred and quickly pitted as the tyre gave way.

Rejoining a lap down, mirroring the dreadful misfortune of the opening contest, Austin more than proved the pace of the Handy entry when all things are equal by posting the eighth best lap of the race and running as the quickest driver on track for much of the latter part of the encounter.

Beginning round 24 from 26th on the grid, his finishing slot from race two, Austin ran the ‘Hard’ compound tyre and made another good start. Although receiving a slight tap at Deene, he continued largely unhindered and then picked his way through a multi-car tangle at Brook to take 21st place.

As the race wore on the Toyota developed a misfire and the team eventually opted to retire the car from the race in order to prevent potential damage to the engine – compounding a vexing weekend of track action.

“We’re obviously frustrated with the results this weekend but we’re also all extremely excited about what next year holds with our announcement”, said Austin, “Alfa is the coolest brand going, it stands for so much and so much passion. Even if I wasn’t driving it myself next year I’d be excited the Alfa name is going to be back in the BTCC. To be the front man of it, though, is awesome.”

From Rockingham, the BTCC heads to the opposite end of Northamptonshire three weeks from now for the penultimate event of the season at Silverstone National Circuit on 16th/17th September.