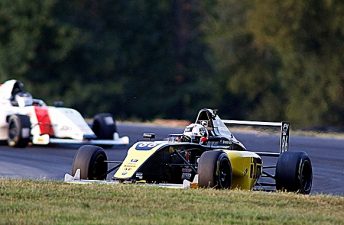 From a high to a bruising low – and back again. After a breakthrough weekend at the previous round of the 2017 FIA Formula 4 Championship, Southland race driver Brendon Leitch has emerged from a battering weekend at Virginia International Raceway physically intact and determined to strike back.

The punishing race weekend began when he slipped off the track in in qualifying.

“I decided to try something different on my last push lap to get a little bit more out of the tyre but unfortunately this time it didn’t pay off for me! It’s very out of character for me to go off in qualifying, but I was very comfortable in the ITM car so it didn’t cause me any trouble with my confidence,” he said afterward.

“I’ve really been working on my qualifying. The grids here are huge so I was really happy to score my highest position of the season. For a while we were 1-2 and it was looking like a Kiwi Motorsport front row lock out but third row of the grid was fine by me.”

Starting from P5 – fifth position – in the first race of the weekend Leitch quickly surged through to hold third and then into the lead, at which time the car’s engine cover broke and began acting like a huge sail.

“That was incredible, I’ve never had that happen before. So without good speed I was slowly dragged back into the pack and ended up fourth at the finish – still banking good points,” he said.

Grid positions for race two were dictated by lap times set in race one. Running with the ‘sail’ put Leitch down to P15 for the race start.

Undaunted, he carved through the field to eighth but was unable to progress due to an extended safety car period which ended the race.

The weekend came unravelled in the third race when Leitch was slammed hard by another competitor on the first lap. The resulting damage saw the ITM car brought back to the pits on a flatbed truck, one sidepod crushed in and its radiators flattened.

“On the bright side, all the electronics are on the opposite side and the tub was undamaged. So, onward and upward to the next round at the Circuit of the Americas down in Texas,” he said.