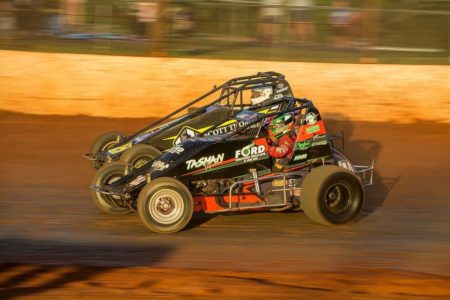 As the saying goes, consistency is the key to success. For Declan Brownsey, it was his consistency that saw him pick up the Tasman Racewear supported Country Cup Wingless Sprint Series point standings win.

Despite not recording a round victory, Brownsey was a model of consistency throughout the four rounds, with a second in the opening round double header at Maryborough Speedway, followed by an eighth in the second round at Bundaberg’s Carina Speedway, then a fourth in round three at Kingaroy Speedway and then another fourth in the final round back at Maryborough Speedway.

“I’ve been competing in speedway on and off across a range of different open wheel and sedan classes for 15 years now, and this is the first time I’ve actually contested a full series point score, and to come out on top in the points is an achievement that is very satisfying,” expressed the Qld # 44 Tasman Racewear / Ford Wreckers Redcliffe supported Maxim driver.

“In the opening round, I put in my best drive of the season to finish in second behind winner Brody Thomsen and ahead of his older brother Scott Thomsen in third, and that performance alone gave me plenty of confidence as I was able to mix it with two of the state’s best racers in the Thomsen brothers.

“My result in the opening round gave me a good foundation for the rest of the series, and from there, I managed to drive consistently in the remaining rounds, and it thankfully led to me coming out on top in the final point standings.”

Currently sitting third in the overall Queensland Club Championship point standings, Brownsey has two more race meetings left on his 2020-21 season calendar, which will both be at Brisbane’s Archerfield Speedway on May 15 and June 5. The latter event is going to double as the annual Brisbane 50 Lapper.