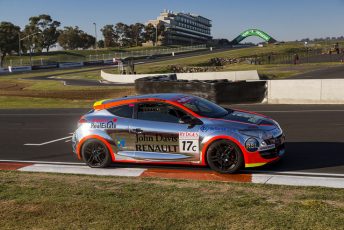 Brothers Blake and Kyle Aubin joined the Australian Production Cars earlier this year and after a promising debut which ended in heartache, are looking for redemption this weekend at the Tyreright Sydney Challenge.

The Tyreright Sydney Challenge is round three of the 2017 APC and will host four x one hour races across July 7-9 at Sydney Motorsport Park.

“Our start to the season at the Hi-Tec Oils Bathurst 6 Hour had a lot of positives but ultimately it was a very disappointing result, given our car speed over the weekend,” Blake Aubin explained.

“Essentially what happened is our steering wheel came loose whilst leading our class after an hour and a half. This saw us in the pits for 18 minutes and left us a lot of laps down.

“We never gave up and even did our fastest lap on the 94th lap of the race, which we see as a positive coming into our next round at SMP.”

The Aubin brothers will be competing in Class C at SMP this weekend.

“In our class any of the cars have the potential to win, so it’s really about your speed and reliability on the day,” Blake said.

“It’s great racing against the other Renaults obviously because of the similarities and we also expect Ric Shaw’s Mazda RX8 to be a hot favourite over the weekend as well as any other class C entries.

“The four x one hour races is an exciting format which we think will create a lot of close battles but, we have never experienced this type of format before. For sure, it will be a busy weekend.

When it comes to the Sydney Motorsport Park venue, the Aubins feel right at home.

We raced at SMP a lot last year so the track is familiar to us and we can’t wait to get out on track Friday,” Blake said.

“SMP has some fast sections and also some slower corners so I think it makes it a level playing field. Car set-up will be vital and this is something we have been working on since joining the series.

“Our expectations for SMP is to bring back a great result for our new sponsors we have onboard which will be announced later this week.

“In preparation, we have been doing a lot of driving on our simulator and also doing some karting with a few mates for fun and fitness.

“Kyle has also been playing soccer for the Western NSW Mariners which keeps him fit while I have been doing a lot of cardio specific training in the gym to stay fit which we think will be important especially on a busy weekend such as what is coming up at SMP!”

The Aubin Brothers Racing Renault Megane and the rest of the APC field will hit Sydney Motorsport Park for the Tyreright Sydney Challenge across July 7-9. Spectator on Friday is FREE and only $15 for Saturday, $25 for Sunday or $30 for a weekend pass. All of Sunday’s action will be streamed online live and free via thenationals.com.au