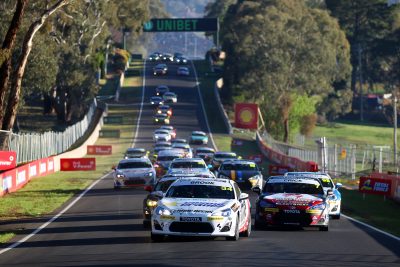 McLaren Real Estate Macarthur driver Tim Brook has banished the demons of Bathurst after a stunning performance to win round five of the 2018 Toyota 86 Racing Series.

Racing around the famous Mount Panorama circuit, Brook enjoyed a near perfect weekend with pole position, victory in the final race, and a strong second position in the weekend’s only other race.

The results see Brook now hold a 48-point championship advantage heading into the final race of the year in Newcastle.

At last year’s event Brook was involved in a crash which ultimately ended his season when he was tagged on Mountain Straight and turned into the barrier.

It ended his chance of challenging for the 2017 title, but now heads into the final race of 2018 as the championship leader.

There were no such challenges this time around, with Brook taking near maximum points away from the event.

A strong practice session saw the Oran Park-based Brook claim a dominant pole position for the opening race, setting a time more than a second clear of his nearest rival in an identical Toyota 86.

However, an incident in the pack shortly after the race start saw it abandoned without a lap completed.

Brook then ran with the leaders throughout Race 2, moving to second place with two corners to go before electing to play the long game as he went door to door for victory at the final corner, wisely settling for the valuable points offered in second place.

A stunning final race of the weekend saw Brook lead every lap to win by less than a second, his fifth win of the year and first around Mount Panorama.

“The weekend was absolutely mega, we couldn’t have asked for much more than that,” Brook beamed.

“Straight out of the box the car was good, so a big thanks to the guys for all their efforts because it made my job that much easier.

“To win at Bathurst is always special, and to do that after what happened to us last year just makes it extra special.

“It’s a shame the first race was cancelled because of the crash, but I’m glad everyone was okay, that’s the main thing.

“Going into Newcastle we’re now sitting in a pretty good spot, but we can’t take that for granted.

“Last year we experienced first-hand how quickly this game can change.

“We’ll buckle down and go back over the car to make sure when we get up there we’re in the best shape we can be.

“But it’s been a phenomenal weekend. I’m stoked.”

The final round of the 2018 Toyota 86 Racing Series is set to be raced out on the streets of Newcastle on November 23-25, again racing on the supporting bill to the Virgin Australia Supercars Championship.