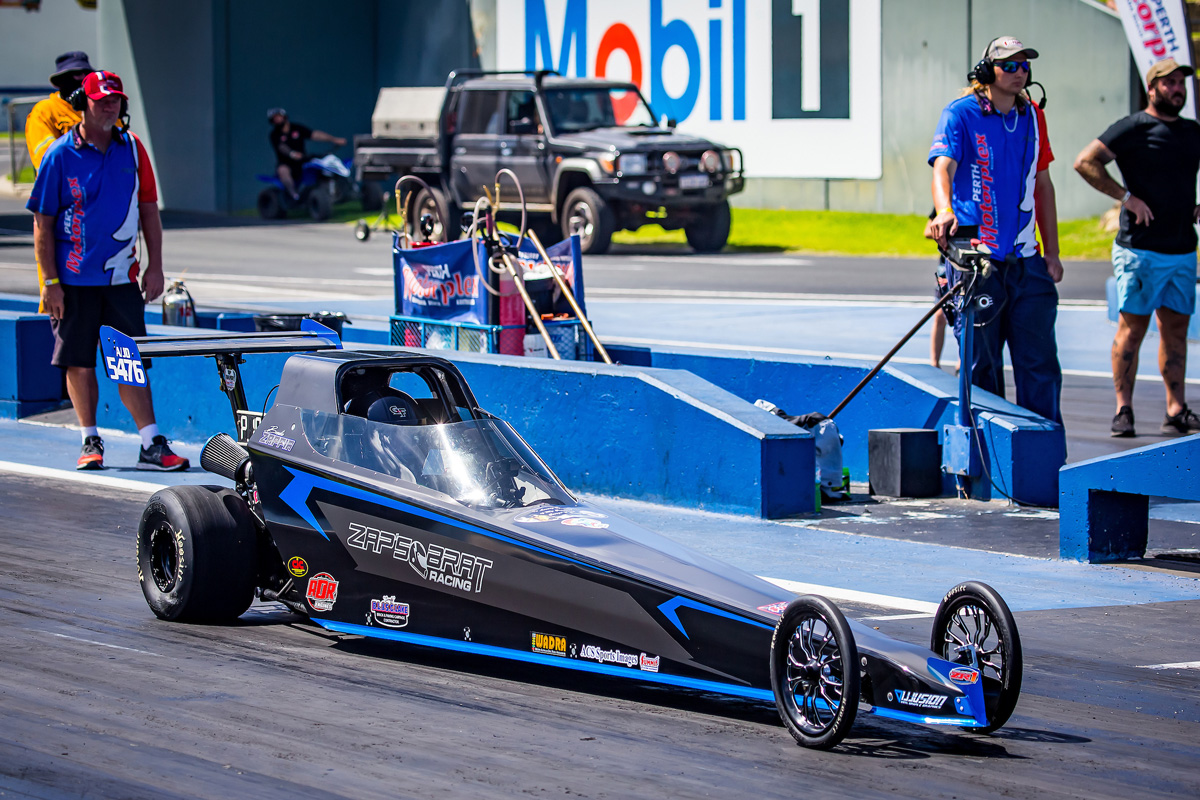 Brodie Zappia – nephew of Top Doorslammer great John Zappia and a successful young racer in his own right – will head to this weekend’s ANDRA Grand Final / Twilight Nationals at Mildura’s Sunset Strip well in the fight for the Summit Racing Equipment Junior Dragster national title (March 12/13).

Fifteen-year-old Zappia is one of four racers heading to the final on maximum points, alongside Tommy Turic, Sarah Donnelly and defending champion Jake Berias.

“I think the National Championship is the most sought-after title in all of drag racing,” said the Year 10 student, who first started racing when he was just in Year Two.

“Personally, I’ve been looking at those people who’ve won it in the past and trying to imagine myself in that position. Now that I have hit 300 points alongside three other drivers, I feel as if this is the closest I have ever been to being eligible to win the championship, and that is what I am hoping to do.

“It definitely won’t come easy with twenty-plus entrants, it’ll be a fight to win, but win or lose the experience of racing a Grand Final in hopes for a championship will be worth the time, effort and money that my parents have put in to get me there.”

Zappia ensured he headed to the Grand Final on the maximum possible points by taking out his first ANDRA Gold Christmas Tree trophy at the penultimate round just weeks ago.

“The 50th Annual Westernationals for me started less than ideally, but finished better than I could have imagined,” he said.

“The Saturday saw me struggling to get the car to run closer to the 8.00 index, the quickest out of four passes being an 8.064, which was only good enough to place us tenth in a sixteen-car field, in what I think was the tightest field I’ve raced in!

“The next day in the final qualifier, after dropping some weight from the last 8.103 second qualifier in the evening, which did not account for weather changes, the car ended up running a 7.949s at 133.06km/h with a brake tap, not improving my qualifying position.

“In the first round I faced Zara Board, a friend who’s also a very determined competitor. Both Zara and I ran close on our dial-ins, but I won with a holeshot.

“The rest of the meeting provided me with a good challenge, another holeshot win with just a 0.008 win margin against Dylan Spadaro in the second round. A double breakout in the semis with a 7.993 on an 8.00 dial-in for me, while Brock Moresby ran an 8.236 on an 8.28 dial-in, sent me to the finals.

“I was both nervous and excited, knowing I had the opportunity for my first Gold ANDRA Christmas Tree was just one race away. Between the semis and the finals, I ate some hot chips and gravy, which ended up being just enough ballast to allow me to run an 8.000 on an 8.00 dial in, with an 0.028 light,” he laughed.

“(Runner-up) Angel Bakranich unfortunately cut a -0.089 light and broke out by 0.018. Nonetheless, I was ecstatic to have won the 50th annual Westernationals and my first Gold ANDRA Christmas Tree, and to do it beside my Uncle, John Zappia. That will be a weekend I never forget!”

The ANDRA Grand Finals event at Mildura will employ the Twilight Nationals event format which debuted at the venue in 2019 and will be a new experience for Zappia.

“Mildura is a great regional track, with great people behind it. I’ve raced in Mildura four times with my old car, and had a blast each time,” he said.

“This weekend will be the first time driving my new car there, and I can’t wait to see how the car will go with the different conditions there.

“I have never raced at a Twilight Nationals event in Mildura and my only night time racing experience in Mildura was at the Friday Night test day before the Junior Nationals in 2019.

“At that time, the weather conditions at night were perfect for the car there and with the recent lighting upgrades with more lighting at the deep end of the track, it seems night racing in Mildura will prove a more viable option in future, and I can’t wait to race there this weekend.”

With a great support team around him, Zappia has a long list of people he would like to thank as he prepares to do battle for the championship.

“None of my racing success would have come about without a lot of people who I appreciate. Their effort, support and belief in me as a racer and as a person has contributed greatly to my race programme and allowed me to be in the position I am today,” he said.

“Firstly, I need to thank Mum and Dad for organising everything, crewing on race day, and helping me work on the car when I need it.

“I also want to recognise Adam Gannaway for being an awesome crew member on race day; Aaron Deery from ADR Engines, for his sponsorship of Redline oil and for his continued support; ‘Scruffy’ from B.L. & S.G. Lake Brick Cartage for his continued support over the last three seasons, and for supporting a large number of Junior drivers across Australia; and Mike Sprlyan from ACS Sports Images for his continued contribution to my racing programme, and for being my longest standing sponsor, from 2014 until present.

“I also would like to thank the Western Australian Drag Racing Association (WADRA) for their support of the Junior racers in WA, and for supporting travelling members; Competition and Industrial Coatings (CIC), for their amazing ceramic coating on my header pipe and for their support; Josh McClennan from Illusion Vinyl Wraps & Graphics, for the awesome new look on the car this season; Pete Matulovich, for his continued guidance throughout my Junior career; and the West Coast Junior Dragster Association (WCJDA) for their support to all Junior racers in WA.

“And finally, of course, John Zappia from Zappia Racing, for being my main inspiration, and a great source of knowledge and support.”

The ANDRA Grand Finals / Twilight Nationals event in Mildura will be held across March 12 and 13. For more event information, visit www.sunsetstrip.org.au

The 19/20/21 Summit Racing Equipment Sportsman Series season has been extended in the face of COVID-19 to not only deliver successful completion of the current competition, but also a record prize pool thanks to Summit Racing Equipment. The performance powerhouse has announced it will offer 50 percent extra end of season prize money for a total prize pool of more than $100k including $10k for the prestigious John Storm Memorial, creating the biggest prize pool in Australian Drag Racing history.