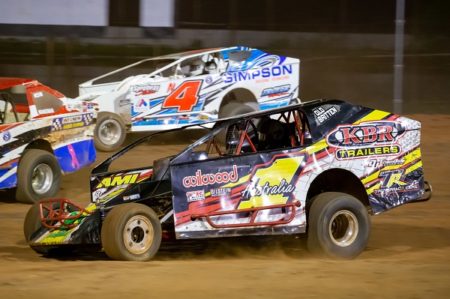 After joining Sprintcar legend Garry Rush with four Australian Championship wins in a row in last season’s Australian V8 Dirt Modified Championship at Toowoomba’s Hi-Tec Oils Speedway (Qld), Britten, from Brisbane in Queensland, moved into a league of his own tonight with an outstanding performance.

From the green light for the feature race, Clark and Britten fought hard throughout much of the opening lap before Britten managed to edge ahead and take control of the lead, which was a position he held for the remainder of the distance. Despite numerous caution periods and even a red-light stoppage for the teams to fuel up their cars five laps from the finish, Britten was challenged on brief occasions but always looked in control.

Throughout the bulk of the 35-lap event both Clark and Robinson tried through to the very end to prevent Britten of creating Australian speedway Championship history. However, stoppages would be activated at the right time, which denied Britten from dealing with a whole lot of dense lapped traffic on most occasions and gave him the ideal situation of a clear track. Even on the final lap of the feature race, Britten had a little wobble going through turns three and four and this allowed second-placed Robinson to close in rapidly, but Britten had a big enough buffer to go on and greet the chequered flag as the winner.

After a horror start to the weekend with a mechanical issue forcing him to miss his opening heat race, Robinson went through his remaining three heat races undefeated and went on to make up a lot of ground in the point standings and start the feature race from position four. The three-time Australian Champion gave it his way throughout the feature race by firstly mixing it with Clark and then going on to do his best to reel in leader Britten but he was unable to do so and brought it home in second.

Backing up his Australian Championship third-place podium result at Geelong’s Avalon Raceway (Vic) in 2015, Brett Clarke completed the podium in third place. The Victorian-based racer, who went into the weekend as one of the event’s leading contenders, took over third in the closing stages after passing Clark and went on to join Britten and Robinson on the podium.

After being the form driver in the lead up to the Australian Championship deciding feature race, Clark struggled to stick with Britten out in front. Despite this, he never gave up and was trying all the way through to the end. A fourth-place finish wasn’t the result Clark and his team wanted but no one can argue that his brand-new 2020 Bicknell car didn’t leave a lasting impression throughout its debut outing.

2001 Australian Champion Scott Cannon put in a solid driver to complete the top-five finishers, while an impressive Trent Scofield finished in sixth, standout performer Zak Blanch ended up in seventh, reigning 5 Star Dirt Series Champion Chris Corbett came home in eighth, the highest placed Sportsman category driver Blake Eveleigh picked up ninth and a gallant Joshua Rose brought home a 10th place finish. The likes of Scofield, Blanch and Eveleigh went into the weekend without much fanfare but they well and truly held their own amongst their more established rivals all weekend long. Rose was playing catch up all weekend after he missed the opening night with engine dramas. In the second and final night, Rose and his team had repaired the engine and armed with a fighting spirit earned a rewarding performance.

Sam Bruggy (Qld) was the biggest feature-race casualty after rolling over in a big way on the opening lap at the end of the back straight. Thankfully, Bruggy wasn’t injured but his car sustained its fair share of damage. This incident allowed feature race’s first reserve Wayne Simpson to join the field for the complete restart.

Aside from Bruggy, 1993 Australian Champion Andrew Pezzutti suffered a right-rear wheel exit his car on the seventh lap, which brought his campaign to a premature conclusion. Last season’s Australian Championship runner-up Mitchell Randall endured a frustrating weekend and after starting from position 13 was involved an incident on lap 20 in turn two while sitting inside the top-10 runners and was consequently forced out with a flat inside rear tyre. Todd Hobson (Vic), who was one of the weekend’s standouts after he had impressively qualified from position three, was gutted to retire due to a mechanical issue on lap 26 while running inside the top five. Zac McDonald (Qld) had also qualified strongly from position nine, but he was the last driver to retire on lap 29. Ben Hodge (Vic) was the only other driver to have his feature-race run brought to a premature end, after he on lap 19 was sent back to the pit area by the chief steward, due to damaged body panels on his car.

In the B main, Luscombe and Firth had a closely fought battle for the top honours but in the end, Luscombe picked up the win. Firth followed Luscombe home in second, while the final two transfer spots were filled by Todd and Wakeman. Just missing out on a feature-race transfer spot was Paul Markulin in fifth and he was meant to be the first reserve but was unable to take his place. Following Bruggy’s opening lap crash, second reserve Simpson was able to take his place in the feature-race field.

Earlier in the night, the heat-race wins were shared between Robinson (x 2), Britten, McDonald, Chris Corbett, Hobson, Rose, Royden Alcorn, Cannon and Clark. Without a doubt two of the heat-races of the weekend were the winning battles between Robinson and Roberts and then Rose and Britten. The heat races were marred by a massive crash by Victorian Stephen Hopkins. He crashed in between turns three and four and performed two big complete rollovers, which caused extensive damage to his car and he was also knocked himself around a bit but otherwise he was uninjured.

The entire Dirt Modifieds Australia committee would like to thank all the officials, drivers, pit crews, the event’s Grand Marshal Ray Klarich, and the Valvoline Raceway track and its staff for making this season’s Australian Championship one of the best, and without a doubt the biggest, in the event’s history.