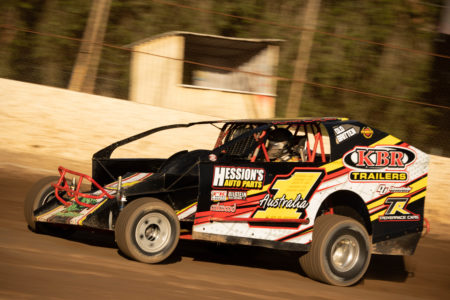 The inaugural Super Dirt Week Series for V8 Dirt Modifieds was fought out over the Christmas-New Year period at Hessions Auto Parts Grafton Speedway, and it saw both rounds dominated by Queenslander Kevin Britten.

Britten, the current and five-time Australian V8 Dirt Modified Champion, showed his class over both rounds (December 28 and January 3) and proved too strong around the 440-metre Grafton Speedway track.

On December 28, for the opening Hessions Auto Parts Super Dirt Week Series round, Britten paced the field for the entire-30-lap journey. At the fall of the chequered flag, he defeated local and pole sitter Joshua Rose in second and 2001 Australian Champion Scott Cannon in third. Victorian visitor Todd Hobson narrowly missed out on a podium finish in fourth. Brock Gardiner continued his impressive 2021-22 season form in the Sportsman category by coming out on top on his way to finishing seventh outright.

The second and final Super Dirt Week Series round was held on January 3, and it resulted in yet another Britten victory, which sealed him the overall Super Dirt Week Series point standings honours. On this occasion in the 30-lap feature race, Britten once again paced the field from beginning to end and once again defeated Joshua Rose in second and another local Andrew Firth in third. For the second Grafton Speedway race meeting in a row, Hobson, who had won the previous night’s Paul Britten 44 Memorial at Brisbane’s Archerfield Speedway, ended up fourth, after his podium hopes were dashed in the closing stages following him running low on fuel. Gardiner, who had finished eighth outright, yet again came out on top in the Sportsman category.

The next race meeting at Grafton Speedway is going to be on the Saturday night of February 12, which is going to feature Late Models, Microsprints (Australian Title), RSA Street Stockers, Production Sedans, RSA Four Cylinder Sedans and RSA Junior Sedans.