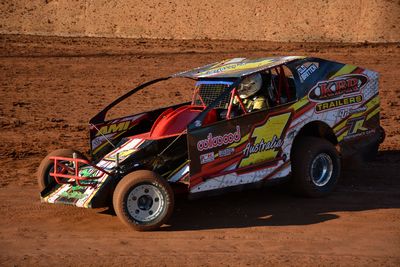 Australian Dirt Modified champion Kevin Britten delivered yet another dazzling display at Archerfield Speedway when he raced to victory in the Queensland Championship on Saturday night (January 23). Having qualified on the third row for the 30-lap championship feature race, Britten spent the early laps in a dice with Scott Cannon before launching his raid on the leaders that would ultimately be resolved three laps from home when Britten charged underneath Mark Robinson to snatch the lead and the championship. Robinson remained second at the flag, with a late-race spin from David Clark elevating Cannon back into the top three.

Whilst the lingering impact of COVID travel restrictions obviously had an impact on the size of the field, there was certainly nothing lacking in the quality of the line-up or the standard of competition the Dirt Modifieds delivered. Trent Scofield got things underway when he launched from the outside front row to win the opening heat ahead of Robinson and Zac MacDonald.

Terry Leerentveld followed an identical trajectory in heat two, starting from position two and leading throughout to finish more than four seconds clear of Cannon, with Britten advancing from sixth to finish third.

A very straightforward heat three saw the first five cars finish where they started with Clark leading the procession, Josh Rose finished second ahead of Corbett, with the only change coming further back with Britten advancing a couple of spots from the back of the grid.

Heat four saw Robinson make an emphatic declaration of his intentions when he sashayed from seventh to chase down Jay Davey and grab a win. Having survived a clash with Andrew Pezzutti that put the latter on the infield with a mangled right front corner, Davey then withstood a late lunge from Geoff Phillips to keep second spot by the barest of margins.

Despite seeming somewhat subdued in his earlier outings, Britten made no mistake from pole position in heat five, downing Robinson and Clark.

The final heat of the night saw Cannon venture into territory that nobody else seemed interested in exploring, shifting uptrack to discover plenty of pace available beyond the pole line, charging around the outside of Corbett to grab a win, with Phil Roberts finishing third.

With Phillips the most notable of those who failed to take their place in the feature race field, 15 drivers would greet the green with Robinson and Clark sharing the front row. Cannon and Scofield occupied row two ahead of Britten, Corbett, Leerentveld, Rose and the rest, which included Pezzutti back in 12th and Mitchell Randall on the back row. Robinson led the field away and the first half of the race was completed in rapid time with Robinson maintaining a narrow advantage over Clark, while Britten found himself snookered behind Cannon. It took until lap 15 before Britten cleared Cannon and then, just a lap later, Scofield would spin in turn four to trigger a restart and put Britten in touch with the lead duo. Two laps into the resumption, Randall spun in turn two and then stopped against the turn four wall immediately after the restart to bring about a further delay. Having lost second spot to Britten on lap 20, Clark threw away a podium placing when he spun to a halt in turn two with just seven laps remaining. Having maintained his composure through the interruptions, the final of which came on lap 25 when a a back straight kerfuffle sent Davey into a spin and resulted in both Pezzutti and Roberts heading infield, Robinson continued to hold sway at the front of the field with Britten closing in. The only lead change of the race came on lap 26 when Britten pounced to relegate Robinson and take control of the race. In a return to something near his best form, Cannon finished third ahead of Clark, whose frantic final laps would see him round up Leerentveld, Corbett and Rose. Next in line were Luke Dunn and Marcus MacKenzie, leaving Davey as the final finisher.

Albeit in different fashion, the Queensland Microsprint Championship feature race also resulted in the current national titleholder emerging victorious. Shane Munro led the 15-lap feature from the get-go and would face no serious challengers as he charged to the chequer. Munro, who also won two of the three heats, would finish more than three seconds clear of Jason Glynn, who was the only other heat winner. Dion Wilson secured the final podium position, with Jacob Lynn home fourth in advance of Matt Hanford and Eddie Schwehla.

In their debut Brisbane appearance, it was perhaps fitting that national champ Rob Rawlings would dominate the Legend Car events, winning two of his three heats and then following up to become the first ever category feature winner at Archerfield. Allen Leayr finished second in the feature ahead of Matt Gordon, who upstaged Rawlings to win the opening heat, with Ken Enright and Ian Jones rounding out the first five.

Following Compact Speedcar heat wins for Michael Kendall, Harry Stewart and Connor McCullough, it was Stewart who backed up to also take out the feature race, his first such success at Archerfield. Kendall seemingly had second place locked up, only to find himself parked in turn four with the chequer on display, elevating McCullough into the runner-up role ahead of Dave Collins, Dion Wilson and Chris Pidgeon.

In the Stockcar feature, the loss of Steve Bateman with a flat tyre immediately after snatching the lead enabled Stu Jefferies to reclaim the top spot and grab his second feature race win for the season. Graeme Rangihuna and Fraser Ward filled the minor placings, a lap clear of the only other finisher in Kev Healy.

Ben Robertson won all three heats and the feature in the Open Sedan A ranks, leading home Les Eisenmenger and Colin Morris, while Ben Harris also prevailed in each of the heats in the B division events before outpacing Trent Dhu and Mark Anderson in the feature.

The next event at Archerfield Speedway is Saturday, February 6 featuring round seven of the East Coast Logistics Sprintcar Track Championship, plus AMCA Nationals, Modified Sedans, RSA Sedans and Ford vs Holden vs Sigma sedans.