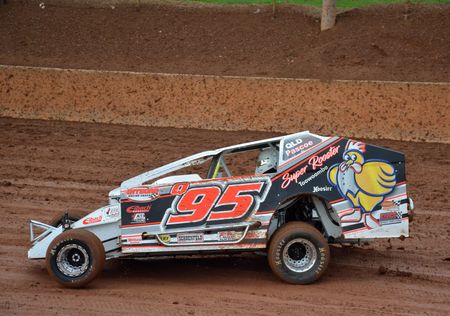 With speedway competitors, fans and track operators having all felt the impact of the travel restrictions, border closures and public health directives that have been implemented over the last two years or so and, perhaps the most significant impact on the industry has been the inability to stage national championship events or other events that traditionally rely on drivers coming together from across the country to showcase their racing division. Well, all that changes this weekend when the Australian Dirt Modified Championship will be decided at Archerfield Speedway on Saturday night (January 22). Whilst the field is a little smaller than expected, which is perhaps understandable given the circumstances, a stellar line-up of Dirt Modfied daredevils from three states will be contesting the event, with local legend Kevin Britten chasing his sixth consecutive win in the event to become the most successful driver in the history of the category. Also on Saturday night, more than 30 Midget competitors will contest the Queensland Championship as final preparation for their own Australian Championship event at Archerfield next weekend, with AMCA Nationals, Compact Speedcars and Open B/Limited Sedans also on the program.

Having already created history as the only driver in any national racing division to have won five consecutive national championships, Britten is the obvious favourite heading into the weekend and is it would certainly be fitting for him to rewrite the record books with a another win on his home track, having scored his first ever national title success at Archerfield during the 2015/2016 season. Such has been Britten’s dominance of the category for so long that only two other drivers in the field have tasted the spoils of victory in an Australian Dirt Modified Championship. Remarkably, Andrew Pezzutti won the event some 30 years ago in the formative years of the category and remains a force today who will likely be one of Britten’s biggest threats this weekend, while three-time winner Mark Robinson is also a very strong contender, particularly given the fact that two of his title successes have come at Archerfield.

A study of the field does suggest that there are numerous candidates who might just have what it takes to topple the big three, with Mitchell Randall, Chris Corbett, Geoff Phillips and Ray Klarich having all finished on the podium at national championship level, the latter having done so on two occasions. For Klarich, a title win would be most fitting given his involvement as a competitor, sponsor and passionate advocate for the category over a long period of time, while both Randall and Corbett are just two of several drivers who have been working hard to establish themselves as the new force in Dirt Modified racing, only to find that the likes of Britten and Robinson are not yet willing to surrender their position at the top of the pecking order. Of course, anything can happen in the heat of battle and, should an opportunity present itself, Randall, Corbett and Klarich should certainly be well placed to pounce, along with Phillips and the likes of Dale Corbett, Terry Leerentveld and Victoria’s Todd Hobson, who returns to the scene of his victory in the Paul Britten 44 just a few weeks ago.

Midgets have made five appearances at Archerfield this season and, as yet, nobody has been able to score multiple feature race wins, with each round of the TFH Series having been won by a different driver, which may well prove to be the case again this Saturday with a bunch of interstaters chasing the Queensland Championship trophy as a precursor to their participation in the Australian Midget Championship on January 28/29. So far this season, Charlie Brown, Michael Kendall, Rusty Whittaker, Jayden Peacock and the current national champ in Carson Macedo from California have visited victory lane at Archerfield in a season that has seen a significant increase in the level of competition amongst a growing number of genuine contenders in the field each week. The fact that feature race winners from seasons past such as Scott Farmer, Brock Dean, Darren Vine and Brad Dawson are yet to collect a win this season is an indication of just how tough it is at a local level at the moment. Beyond the regular faces in the field, a couple of occasional racers in Brendan Palmer and Troy Ware have enjoyed success at Archerfield previously and, with strong form from the likes of Casey O’Connell and Lachlan Paulger in recent weeks, the locals are very well placed to ward off the interstate invaders. New South Wales is arguably sending their best four drivers in a bid to steal the Queensland Championship trophy, with Kaiden Brown, Nathan Smee, Michael Stewart and Matt Jackson heading north, while Victoria will be represented by Caleb and Travis Mills, setting the scene for some spectacular action as drivers seek peak performance, not only to secure the state title trophy, but to also ensure that all is in readiness for their national championship quest the following weekend.

The form of Bruce Marshall, Steve Price and Steve Potts in the Shock Absorber Therapy AMCA Nationals Track Championship so far this season has been so strong that nobody else is yet to find their way into victory lane, including Victorian champ Matt Hardy and current Queensland and New South Wales titleholder Tony Blanch. With Price not amongst the entries this week, there is at least one spot on the podium up for grabs, however Hardy and Blanch will first have to fend off the likes of Brett Robotham, Graeme Holland, Kevin Stow, Michael Denning and another ten competitors to put themselves in a position to pounce should Marshall and/or Potts falter.

With numbers on the rise, Compact Speedcars have promised a 16-car field for the first time this season, from which young guns Bodie Smith and Harry Stewart are expected to be the pacesetters, while the absence of several regulars from the Open B/Limited Sedan ranks should, in theory at least, should have Ben Harris feeling very confident about his chances of scoring back-to- back feature race wins.

Gates open at 3.00pm for online ticketholders and general admission ticket sales are from 4.00pm, with early racing at 5.00pm. The main program, featuring the Australian Dirt Modified Championship and the Queensland Midget Championship, will get underway at 6.00pm.