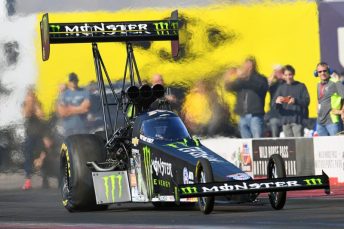 But she hopes to scale even bigger heights for the 2017 NHRA Mello Yello Drag Racing Series season, which starts with the Circle K NHRA Winternationals this weekend at Auto Club Raceway at Pomona.

“People have asked me about the championship the last few years, and it was hard for me to answer because we hadn’t gotten our first win yet,” Force said. “For me, I wanted to focus on getting that first win, and then you wrap your head around the next step, which is winning more races and building up to that championship. Now that we’ve gotten that first win off our back, I know we can do it.

“We had three wins last year and had our best season yet, but we’re going harder this year. We want more this year: We want more wins and ultimately that championship.”

Force scored her first career Top Fuel win at Gainesville, Fla., last March and followed up with victories at the first Charlotte race and at Brainerd, Minn. She led the points standings for four weeks before finishing a career-best sixth in the final Top Fuel standings.

“I’m definitely pumped for the season,” Force said “It’s been a long off-season. It felt good to go out at test on Phoenix. We definitely needed to be out there testing – I needed it just because I was out of the seat for so long. It felt good to get back in there, but now I’m ready for some competition. I’m ready for the season to start, ready for some wins and to go after that championship.”

Force has mysteriously struggled at the Winternationals, as she’s looking for her first round win here. She’s done better at the second Pomona race and still enjoys racing at the famed track.

“I love running at Pomona,” Force said. “It’s my home track, and I grew up there watching my dad and then I ran Super Comp and A/Fuel. Now, I’m out here for my fifth season driving a Top Fuel car. More than anything, I want to bring a win home from there. My friends and family always come out to watch, so to be able to win the first race of the season would be awesome and set us up for the year. We’re ready to get to Pomona and throw down.”

Force has competed in four previous Winternationals – all since 2013.
Force is still seeking her first Winternationals elimination round victory. She is 3-7 in elimination rounds at Pomona, all three round wins coming in the November race.
In her career, Force has competed in 92 races, and has totaled three victories and 87 round wins.
Force’s best qualifying position for the Winternationals was sixth last year.
Force lost her previous first-round matchup to conclude the 2016 season. Prior to that, she won seven consecutive first-round matchups.