British Talent Cup riders take to the stage at Silverstone

British Talent Cup riders take to the stage at Silverstone 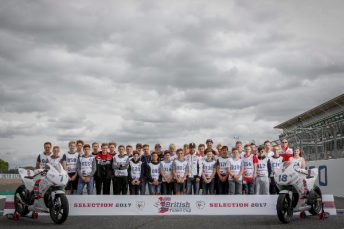 After meeting Cal Crutchlow, Bradley Smith, Scott Redding, Sam Lowes, Tarran Mackenzie and British Talent Team rider John McPhee during the MotoGP™ Pre-Event at the British GP, it was the BTC riders back in the spotlight later in the day as they headed to the main stage for the Two Wheels for Life day.

There, the class of 2018 were introduced to the crowd, and the faces of the newest path on the Road to MotoGP™ got their first taste of the limelight. They were then asked some questions about where they’re from, their route to being selected for the BTC and what they hope to achieve in future – as well as the crowd getting an insight into what to expect with the British Talent Cup.

Now, the Road to MotoGP™ really gets in gear – from absolute beginners to future champions.