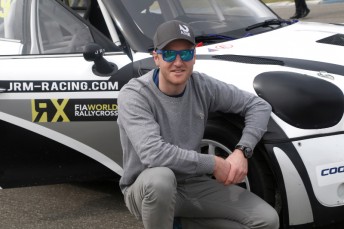 The 34-year-old will drive one of JRM Racing’s exciting new 1.6-litre MINI RX Supercars in the eagerly anticipated Motorsport News World RX of Great Britain, the UK’s only round of the action-packed World Rallycross Championship. His car will feature a ‘KNE’ (Karting North East) livery – promoting Wilks’ successful outdoor activity, entertainment and corporate event business in the North East of England.

“Rallycross is a sport that’s really going places and I see it as the next chapter in my career,” said Wilks, who has a long history of success in traditional stage rallying. He won back-to-back British titles in 2007 and 2008 as well as enjoying notable results on the international stage as a factory driver for teams such as Proton, Suzuki, Skoda and Peugeot.

“As a driver that’s had a successful career rallying in the World Rally Championship, IRC, across Europe and in Britain, I know I have the skills and experience to make an impression in rallycross.

“Joining the JRM Racing team at Lydden Hill is an exciting opportunity for me to take my first steps in rallycross and being part of an all-British line-up at Britain’s only round of World RX will be a proud moment as well.”

“This season is a development year for JRM and the MINI RX but I like what I saw of the car in Germany,” he said. “The chassis looked like it was working well and that it gives the driver lots of useful feedback. The engine is the subject of a continuous development programme, so I’m looking forward to seeing what the whole package has to offer on home soil.”