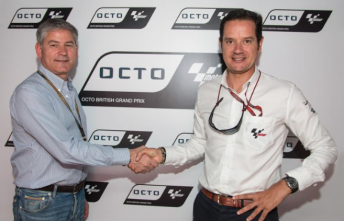 MEDIA RELEASE: The British round of the 2015 MotoGP World Championship, to be hosted at the Silverstone Circuit, is now sponsored by Octo Telematics.

Italian telematics company Octo reached an agreement with the series’ commercial promoter Dorna Sports SL for a complete sponsorship package that includes the naming rights for the 2015 British event, with an option to extend the deal for a further two years.

This is not the first relationship between Octo and MotoGP™ as the brand has been, and is currently, supporting teams in the World Championship. The new involvement of this partner confirms the ever-growing interest in the world’s top motorcycle racing championship. The popular GP held at Silverstone will therefore be called the OCTO British Grand Prix.

Fabio Sbianchi, CEO, Octo Telematics said: “Silverstone is the home of MotoGP in the UK and The Octo British Grand Prix is a huge platform to demonstrate Octo’s commitment to international motorsports and to further our connected car and bike telematics services. The Octo British Grand Prix gives us the perfect opportunity to showcase what we do.”

Pau Serracanta, Managing Director of the Commercial Area at Dorna Sports commented: “We’re pleased to welcome a global market leader such as Octo in the MotoGP World Championship. The company quickly established itself as a reference by offering cutting-edge telematics services and this collaboration should allow them to further heighten their profile on a global scale. Being at the forefront of technology and innovations is key for the MotoGP World Championship, and this partnership with Octo gives them the perfect platform to develop their own strategy.”