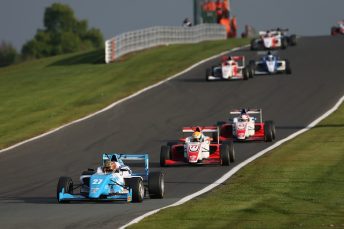 The second round of the 2017 BRDC British F3 season takes place at Rockingham this weekend, with three races on the unique banked circuit in Northamptonshire.

The action comes thick and fast in the UK’s premier single-seater championship with the second round of the 2017 season taking place at Rockingham this weekend (29/30 April), just two weeks after the campaign got underway with three thrilling races on a ‘Super Monday’ at Oulton Park.

Heading to Northamptonshire, there is one man everyone will be determined to beat: Enaam Ahmed. The Carlin driver was in imperious form last time out and completed a historic hat-trick of victories to claim a maximum haul of 95 points and become the early championship leader.

The 17-year-old didn’t have it all his own way though with Carlin team-mate Cameron Das pipping him to pole position in qualifying and running him close during race three. The reigning US Formula 4 champion impressed in pre-season too and will be aiming to challenge for wins once again as he looks to close the gap to the standings leader.

James Pull separates Ahmed and Das in the overall standings after taking to the podium twice at Oulton Park, and will be one to watch this weekend. Returning racer Ben Hingeley currently occupies fourth spot after claiming a stunning second position in race two of the opening weekend, despite suffering accident damage.

The Fortec Motorsports man is four points clear of South African Callan O’Keeffe, who took to the podium on his return to full-time racing. The Douglas Motorsport driver was disappointed not to leave Cheshire with a better finish than third though, having begun the restarted race two from pole position before suffering a tardy getaway.

Chris Dittmann Racing’s Omar Ismail enjoyed a solid weekend and is sixth ahead of Lanan Racing’s Toby Sowery in seventh. Sowery, one of the pre-season title favourites, enjoyed a miserable weekend at Oulton Park, sliding out of the lead in race one before getting tangled up in a race two first corner crash which led to a DNF. The Cambridgeshire-based racer will be looking to bounce back strongly at Rockingham this weekend.

The top-10 is rounded out by Danish racer Nicolai Kjaergaard, American Chase Owen and Australian Harry Hayek, who all enjoyed consistent first weekends in BRDC British Formula 3. Others to watch out for include the Double R Racing pairing of Guilherme Samaia and Jamie Chadwick, who showed good speed at Oulton Park but were hindered by a number of on-track incidents across Bank Holiday Monday.

To show support for Billy Monger, who suffered life-changing injuries in a crash at Donington Park recently, each car will sport special decals featuring Billy’s helmet and the hashtag #BillyWhizz. To donate to the JustGiving fund which has been set up to support Billy, please click here.

Rockingham played host to the second round of the championship in 2016 and saw two thrilling battles between Carlin team-mates Lando Norris and Ricky Collard, each taking a win apiece. Australian Thomas Randle announced his arrival to European racing by claiming his first win of the season in the partially reversed grid race two.

This year’s action at Rockingham gets underway with the 30-minute qualifying session on Saturday at 10:35 before race one follows at 14:00. The partially reversed-grid race two begins at 09:50 on Sunday morning before the third and final race of the weekend gets underway at 16:30.

You can keep up with all the action from Rockingham through live timing and updates on the official British Formula 3 website. Highlights of the racing in Northamptonshire will also be broadcast on ITV4, BT Sport and Motorsport.tv one week after the meeting.