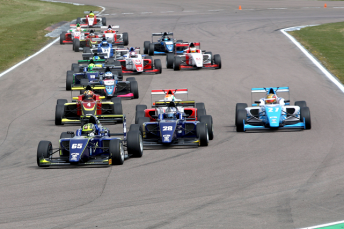 The third round of the 2017 BRDC British F3 season takes place at Snetterton this weekend (27/28 May), with three races on the Norfolk venue’s 300 circuit.

The UK’s premier single-seater championship returns to action at Norfolk’s Snetterton circuit this weekend (27/28 May), following a dramatic weekend at Rockingham where new title contenders emerged.

Early title leader Enaam Ahmed was set to extend his title lead at Rockingham following a win in the opening race, his fourth in succession. But in a dramatic twist, first corner incidents delayed Ahmed in both of main raceday Sunday’s rounds, allowing his rivals to close in on his advantage and narrowing his lead to 15 points.

Ahmed could only manage two eight place finishes in Sunday’s races, and the first to benefit was his Carlin team-mate Cameron Das, the reigning US Formula 4 Champion. After adding a maiden win to his two Saturday pole positions, Das lies second in title race heading to Snetterton.

Rival team Fortec is poised to attack this weekend, with Welsh racer Ben Hingeley winning the most recent round to assume third place in the standings. He is one place ahead of Carlin’s James Pull, who finished second twice at the Oulton Park season-opener and looking for his first British F3 win.

Fifth place in the standings is South African former Red Bull and Lotus Junior Callan O’Keefe, who is another double podium finisher. For this weekend he’ll be joined at Douglas Motorsport by debutant Jordan Cane, who turns 16 on the Tuesday before the event.

Lanan Racing’s Toby Sowery heads to his home round determined to make up for a troubled start to the season having started as title favourite. Behind him in seventh place is Chris Dittmann Racing’s Omar Ismail and Hillspeed’s American charger Chase Owen.

In ninth place is Jamie Chadwick, who is aiming to follow up an encouraging weekend in Northamptonshire where she scored her first podium finish. The top ten is completed by Fortec’s Danish racer Nicolai Kjaergaard, who is hunting down his maiden British F3 podium.

Last year Snetterton held the opening rounds of the 2016 championship, and current title leader Ahmed got his campaign off to a strong start with two podiums and a win, whilst there were also wins for eventual champion Matheus Leist and Lando Norris, who is now a member of the McLaren young driver programme.

This year’s action at Snetterton gets underway with the 30-minute qualifying session on Saturday at 11:35 before race one follows at 15:20. The partially reversed-grid race two begins at 10:20 on Sunday morning before the third and final race of the weekend gets underway at 15:15.