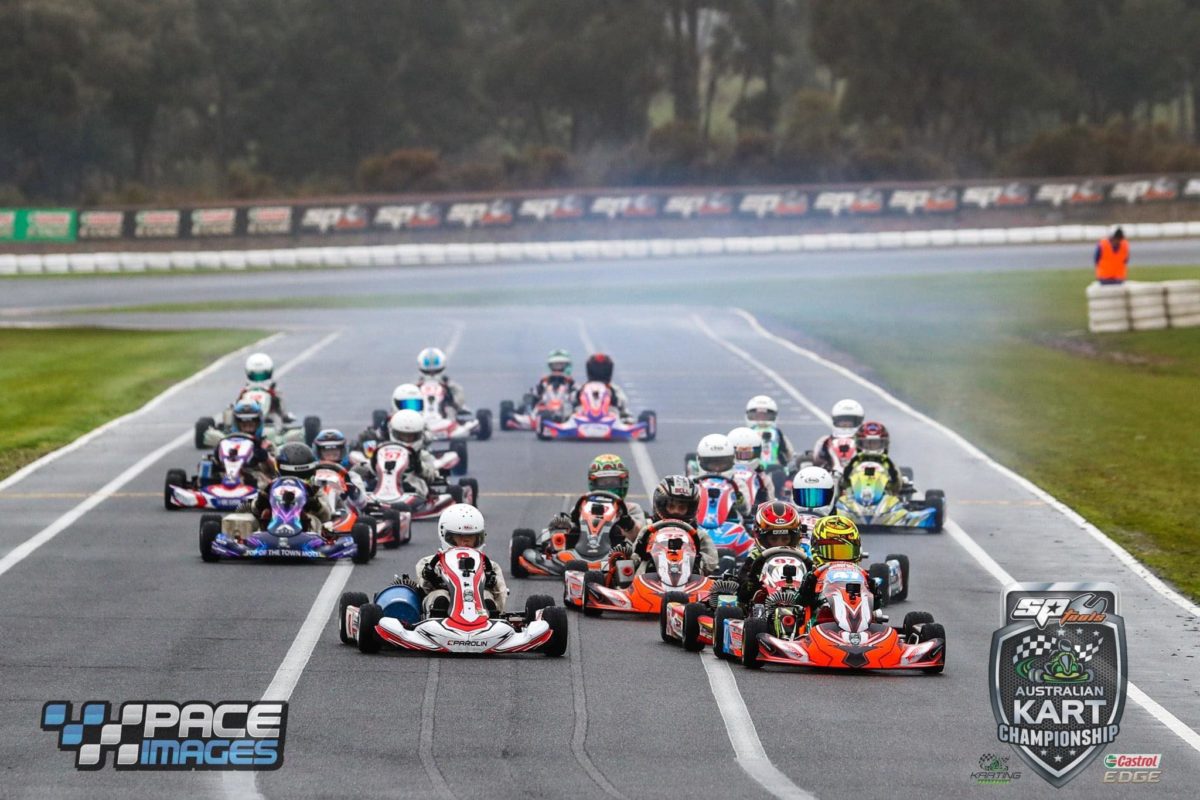 Archie Bristow made his debut over the weekend at the SP Tools Australian Kart Championship at the Eastern Lions Kart Club. Bristow is a driver who has been making waves in the Victorian Karting ranks racking up many podium results and race wins. Archie put himself on pole position and won three races at the recent Victorian Kart Championships and was looking to use this form at the top level of Australian Karting.

Bristow utilised Friday practice to the best of his ability before hitting the track Friday afternoon for qualifying. The Bristow Motorsport entry immediately put himself in the top ten and then was in the top five battling for pole position. Archie set a time fast enough for second spot just behind championship leader and Victorian champion Cruz Kelly. In a tough but exciting session, Bristow put himself up on the front row of the grid on debut at the SP Tools Australian Kart Championship!

The rain had arrived overnight and Bristow opening heat was under wet conditions. The Bridgeswade Pool’s and Spa’s backed entry slotted into second spot on the opening lap but dropped to third behind Carter Lamperd in the early stages. Archie put in a smooth and calculated drive behind Lamperd for majority of the race and was trying to make his way back up into second place. Archie crossed the line in position three but due to a post-race penalty was classified in position five.

Heat two was once again under tough and tricky conditions, with Bristow slotting into second spot at completion of the opening lap. Archie’s Parolin entry was working well and the young driver was able to hold down the spot in the early stages. Bristow got into a battle for second spot in the back half of the race with Jensen Damaschino. In what was a tough battle to finish the race, Archie was able to cross the line in third spot and grab more valuable points to his starting spot.

Heat three was the final race on Saturday for Archie and he was looking at finishing his weekend on a high. The Bristow Motorsport karter got a great start and slotted into second spot. Bristow was able to hold his spot down in the first half of the race but was coming under pressure from Carter Lamperd in third. Lamperd was able to make the move for second and Bristow came home in position three to round out an exceptional Saturday of racing for the young driver!

Sunday morning was once again under tricky and wet conditions and Bristow was looking to continue his strong weekend. The Bridgeswade Pool’s and Spa’s backed entry was in second position off the start and was doing an incredible job in treacherous conditions. Bristow wasn’t able to go with race leader Kelly but pulled away from the rest of the field and crossed the line in second position to round out his heats.
The final come at a tough times for drivers and pit crew weather to go out on slicks or wets. Bristow and his team went the decision of a wet set up as many showers had occurred throughout the day. The track unfortunately dried up and Archie didn’t have the set up and pace to challenge for victory. The young driver pushed as hard as he could in trying circumstances and came home with a respectful eighth position!

Archie’s father Matt spoke to us post weekend in regards to his young driver’s performance. “Archie did his best to back up his results from the Victorian Kart Championship. Being in the top five all weekend through practice, qualifying and heats is a tough task when you are up against the best of the Cadet 9 drivers. The cancelled lunch break caught us out not knowing until we saw some other karts heading to the grid. With no time to change the set up from the previous heat we chucked the kart down in P2 and prayed for rain. Going out on a near dry track with a full wet setup left us with a huge challenge. Tyres were cooking from lap five and Archie described the experience as “like driving on jelly”. As the laps went by our pace was dropping. He did a mega job to finish still in the top 10. Although we believe we could have had a better finish to the weekend, we are still happy with the overall results. Archie has shown he had the pace in both wet and dry conditions. Congratulations to all of the Cadet 9 drivers, every one of them drove superbly throughout the weekend”. Archie Bristow will be a name and driver to watch in the back end of 2022.