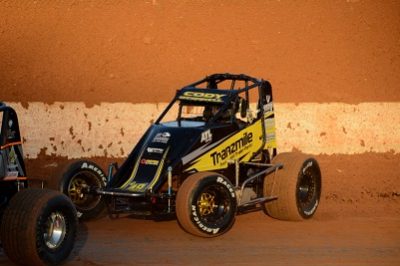 On a very chilly winter evening, the 2017/2018 season of competition at Ausdeck Patios Archerfield Speedway drew to a close on Saturday night (June 2) with a mixed program of sedan and open wheel events that produced some close racing and a couple of huge crashes, the most spectacular of which resulted in a damage to the safety fence and brought about a delay in proceedings. Despite finishing second in their respective feature races, it was Brant Chandler and Aaron Kelly who prevailed in the wingless Sprint and Lightning Sprint season pointscores, while Jason Walsh, Wayne Kirkman and Nathan Lowe shared the spoils in the Australian Championship finals for Open Sedans and Holden vs Ford vs Sigma Sedans.

Heading into the night, Cody O’Connell needed to significantly outscore Chandler if he was to somehow snatch victory in the Ian Boettcher Race Parts Wingless Sprint Club Championship and he certainly rose to the challenge, finishing ahead of Chandler in three of the four races and winning the feature race, but ultimately falling short in his championship chase.

It was Matt Wright who kicked things off in winning the opening heat ahead of O’Connell and Chandler, with Brad Keiler downing Paul Robinson and O’Connell in heat two.

Josh Dreaver led every lap of heat three except for the one that counted most, edged out by Brody Thomsen in the final millimetres to lose by 0.051, with Chandler third on this occasion.

O’Connell set a cracking pace in the 15-lap feature race and never looked under threat but needed Chandler to finish well down the order to secure the Club Championship. However, Chandler knew that a top-five finish would be enough and he slotted into second spot from the outset and followed O’Connell home. Brad Keiler occupied third spot in the early stages before being relegated to fifth behind Scott Thomsen and Michael Butcher in what was a spirited scrap for the minor placings. Robinson, Dreaver and Wright were next best, with Rob Hamilton and Corey O’Toole rounding out the top ten.

The Lightning Sprint Club Championship played out along similar lines with Keith Blatch trying to chase down Aaron Kelly to take the series. With Kelly plagued by a series of setbacks in the heats, Blatch emerged as top qualifier for the feature race and subsequently went on take the race to end his Queensland Championship-winning season with further success. However, driving the #51 normally campaigned by Tyler Stralow after failing to finish the second or third heats, a surging run into second place in the feature race was enough to ensure that Kelly clinched to club pointscore. Bouncing back from a heat race rollover, Jeremy Hassall finished third in the feature ahead of Jason Rae, with Kurt Wilson salvaging a fifth-place finish after spinning twice in turn four.

Blatch won the opening heat from Wilson and Kelly, with Hassall high-tailing it to the chequer in heat two to defeat Blatch and Darren Baldwin.

Driving the #48 usually campaigned by David Van Vegchel, Wilson took out the third heat in advance of Blatch and Rae.

A distinctly State of Origin flavour pervaded the Junior Sedan racing and the youngsters put on a terrific display. Queensland struck first blood with state champ Casey O’Connell leading home Dakota Laverty in the opening heat, leaving Josh Boyd in third as the best of the southerners.

The Blues bounced back in heat two though with a trifecta result that saw Josh Weir lead Brock Youngberry and Boyd to the flag, with Matthew Weir prevailing in heat three over Laverty and Youngberry.

Laverty led the opening laps of the feature before being swamped at a restart after Josh Weir flipped out through turn one. In a thrilling battle at the front of the field, it was Boyd who emerged victorious over Youngberry, O’Connell, Laverty and Matthew Weir, with Zac Pascoe snaring sixth after starting at the back of the pack.

Brock Armstrong downed Luke Gray and Aiden Weir in the opening Street Stock heat and heat two then saw Nigel O’Neill home first, with Weir second ahead of Gray on this occasion. However, come feature race time there was no stopping Madison Harkin from the front row as he led every lap to defeat Glen Armstrong, Paul Youngberry, Gray and O’Neill.

The heat racing took its toll on the Holden vs Ford vs Sigma field, leaving just six cars to contest their Australian Championship final. Jason Walsh emerged a comfortable winner, finishing more than four seconds clear of Matthew Hannigan, who had earlier won two heat races. After making a smoky exit from his opening heat and then missing his next start, Michael Laver bounced back to finish in third spot ahead of Troy Price.

Dave Tookey was the only other heat winner but was one of several drivers who failed to start the feature.

Having completely dominated the Open Sedan B racing this season, Ben Robertson started his championship campaign with a win in the opening heat but was plagued by mechanical maladies for the rest of the night and failed to finish his remaining starts, including the feature race. Scott Taylor took out the second heat but also failed to go the distance in the main event, leaving Nathan Lowe to take the race with a margin of more than eight seconds over Alex Sweeney and newcomer Noel Caplet. In a race that saw more than half the field fail to go the distance, Lesley Beer finished fourth and was followed to the flag by Jaycina Craft and John Woolf.

Wayne Kirkman and David Mortimer shared the spoils in the Open Sedan A heats and then duelled throughout the feature race before Kirkman emerged victorious. Mortimer finished second ahead of Scott Trussell, with Nathan Jones fourth at the flag.

Kyle Honour won the Modlites final ahead of Jared Stephenson and Angela Leerentveld, with other winners on the night including Graeme Rangihuna (Stockcars), Lesley Beer (Ladies Race) and Nigel O’Neill (King of the Ring), while Larkin teamed up with Dave Putsey to win the Open Enduro and bring the season to a close.