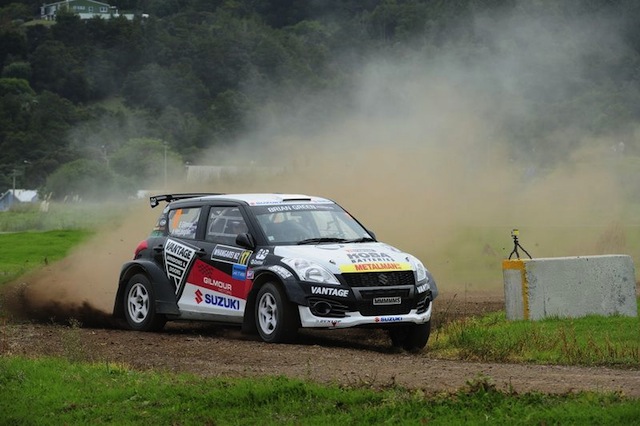 Emma Gilmour and co-driver Anthony McLoughlin will be looking for a strong finish in the Suzuki Swift Maxi at the Rally of Otago this weekend. pic: Geoff Ridder

MEDIA RELEASE: rally – Rallying on home turf is always a welcome occasion and Dunedin driver Emma Gilmour is looking forward to building on the early-season speed she has found in her Vantage Suzuki Swift Maxi, at this weekend’s Rally of Otago.

She and Brisbane-based co-driver Anthony McLoughlin finished third on the second day of the International Rally of Whangarei last month at the opening round of the Brian Green Property Group New Zealand Rally Championship (NZRC) driven by VINZ.

“That first round gave us a good idea of where our speed was at and we want to keep on improving on that pace,” Emma says.

It was unfortunate that a part broke off the alternator at the end of Whangarei’s first leg, which meant the Suzuki Swift Maxi was unable to finish that day – something Emma wants to remedy this Saturday and Sunday.

“We had such a strong showing at Otago last year where we were running second until the camshaft broke on one of the final stages. So we know we have the pace but as is always the case with rallying you just need the car to hold together until the end of that final stage,” Emma says.

She is looking forward to vying for the top stage times with Whangarei front-runners NZRC leader Ben Hunt, of Auckland and Rangiora’s Matt Summerfield over Otago’s 16 stages.

The bonus of competing at home is that she is able to enjoy driving her “favourite” rally roads, which will be lined with local supporters.

Emma’s fans can catch her throughout the Rally of Otago at the following locations.

Friday night motorshow and ceremonial start at Dunedin’s Octagon. It starts at 5pm and the first car leaves at 6.15pm.

Saturday: Service park at Palmerston from 11am onwards. Then back in Dunedin for the tarmac super special stage at the wharf area by the Anzac Ave overbridge from 3.25pm.

Sunday: Service park at Waihola from 10am and again from 12pm.