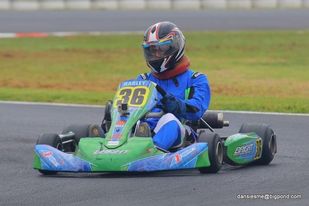 Bright Brothers Racing took on the third round of the Golden Power Series at the Albury Wodonga Kart Club over the weekend. With Bodhi competing in KA3 Senior Medium, Zane in TAG 125 Light and Harley in KA3 Senior Light the boys were in for a busy weekend of racing. All three drivers were looking to put their best foot forward and come home with a strong result.
Bodhi took to the track in KA3 Senior Medium for qualifying and was right amongst the top ten and pushing the top five. Bright put his kart on position six overall. Bodhi put in a great opening heat battle on the edge of the top five and coming home in position seven overall. Bright had and unfortunate DNF while battling for position in heat two and was able to move back up to position eight in heat three after starting down the order. Bodhi threw everything he had at the final and pushed his way back up to position seven to round out the weekend. The young driver spoke post weekend of his results. “It was a good weekend with some decent results, I struggled to find the pace to be able to run with the leaders but I got quicker over the weekend and ended up nearly as quick as the leaders in the final. Unfortunately, I had a mechanical failure in heat 2 which resulted in a DNF which hurt my starting positions over the weekend. Overall happy with 7th and looking to have some better results over the next few rounds”.
Zane Bright was up next in the ultra-competitive TAG 125 Light class. Bright was up against some of the best drivers in the state and at national level and was pushing the top fifteen on times. Bright qualified in position fifteen and put in an excellent opening heat where he was able to move up four spots and push his way on the edge of the top ten. Zane had unfortunately run out of luck from there with mechanical failures and incidents ruling him out of the remaining races. Zane spoke post weekend of his rough weekend but was happy with his overall pace. “It was a mixed weekend with some good pace but had some bad luck. I was taken out in Heat 2 and then had mechanical failure in heat 3. I had good pace and was coming through the pack in the final but unfortunately the mechanical issue from heat 3 came back resulting in a DNF”.
Harley Bright was the final brother of the weekend taking on the near twenty five kart KA3 Senior Light field. Harley did a great job to qualify inside the top fifteen and had the eyes on to move forward in the heats. Bright put in a stellar performance in heat one moving up to position eleven overall. Harley battled around the top fifteen in heats but was involved in a couple of incidents hurting his push into the top ten. Harley was battling hard in the final and continued to try and push his way forward. Bright came home in position fifteen in the final and spoke post weekends of his ups and downs. “I had good pace, improving all weekend but got caught up in a couple of unfortunate incidents. I didn’t get the result I wanted in the final but overall happy with the weekend”.
Bright Brothers racing will be back on deck for the fourth round of Victorian Golden Power Series in July at the Eastern Lions Kart Club.