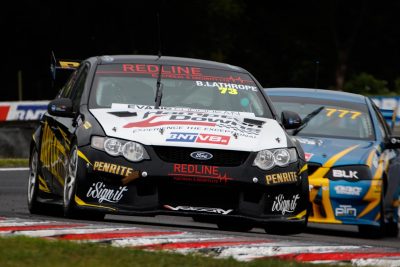 Brad Lathrope is starting to find some confidence in his Class One debut season with one round remaining in the BNT V8s.

This year he stepped up from Class Two in a Ford Falcon BF into a Ford Falcon FG V8 SuperTourer driven for two seasons by Steven Richards.

Lathrope’s first round in the Class One league began with a big crash at Pukekohe Park, but since then he’s been working hard to get up to speed.

Last weekend he contest only his third round of the championship after missing the South Island leg of the calendar. Lathrope felt he was on the right track to get more good results at the New Zealand Grand Prix meeting held at Manfeild Circuit Chris Amon.

“We made some really good inroads this weekends,” he said.

“I’m definitely a bit closer to the front guys, which is very positive in that sense. I’ve still got another second to find before we can start having a play with the guys at the front.

“I was very pleased with the consistency we had in race one. That was definitely a good stepping stone to build more confidence in the car. The confidence building from this weekend has definitely taken us a step forward in the right direction.”

Lathrope’s goal before the weekend was to be within reach of the leaders. In race one he finished fifth, two seconds adrift of the fastest time set by Virgin Australia Supercars Championship podium getter Andre Heimgartner. However, still 19 second behind.

While he said much of the pace has to be found from the driving side, he has also been giving his team the best chance to finetune the car to find a few tenths.

The final race of the weekend saw rain keep the circuit damp. Lathrope pitted early on in the race to get wet tyres and test the crew’s tyre changing skills.

“In that last race it was a bit hit and miss. I decided to come in and put some wets on it to get a bit of testing. It was a bit sketchy out there in the last race with the conditions getting consistently wetter.

“I made the call. It’s good to give the boys some experience of changing tyres during a race. I went out and tried to push a bit hard. It’s just confidence building.

“I was quite happy with how the car felt and was making some good improvements in regards to driving the car to what it is capable of. We’re getting closer to the full potential.”

Lathrope said he’s looking forward to getting back out on track with one more round remaining at Hampton Downs Motorsport Park over March 9-11.

“I still would have loved to be higher up in terms of outright lap pace, but once again it comes down to seat time.

“What the experienced guys have up the front in regards to driving over my experience in driving, that’s showing at the moment.

“We’ll get there. It’s a slow journey for us. We’ll keep knuckling down and if he keep having inroads like this each round then we’ll be heading in the right direction. Fingers crossed we’re there next season to start having a decent crack.”