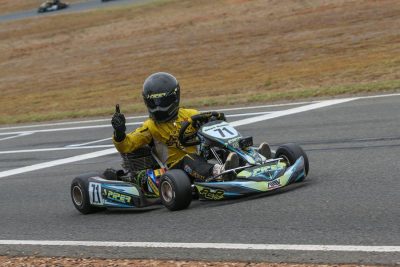 Bridgestone Karting Australia will be servicing 100 competitors at this weekend’s third round of the Australian Kart Championship, to be held at Newcastle this weekend – including the closest Championship in the Series – KA4 Junior.

Opening round winner, Rhys Smith should have home track advantage at Newcastle coming from New South Wales and having more experience around the circuit, while third placed man, Fletcher Harris has catapulted himself into Championship calculations after winning the previous round at Albury-Wodonga.

In the sub-Junior categories supported by Bridgestone, the gaps are a little wider.

European Mini Rok regular, Marcos Flack is showing the experience he has gained from racing internationally with the Energy Corse factory to lead the Cadet 12 Mini Rok category by 24 points, while Victorian Lewis Francis made the most of a switch to the all-conquering Kart Republic chassis at the previous round to lead the Cadet 9 Mini Rok class by a commanding 38 points heading for the third round of the Series.

All KA4 drivers, along with Flack, Francis and many others have themselves squarely in the frame for the $1000 Bridgestone Super Cup which will be awarded to one driver at the end of season Presentation Gala. It is awarded to a driver that does not necessarily win the Championship, but presents the ‘total package’ from look on and off the circuit, to treatment of officials, other competitors and all round sportsmanship.

2018 represents the third year of the Bridgestone Super Cup as inaugurated by the Australian importer of Bridgestone Kart Racing Tyres, Paul Feeney Group.

In all, the 100 competitors that will be lining up on the Bridgestone Kart Tyres this weekend and a very different challenge will be presented from the last time the SP Tools Australian Kart Championship visited the Newcastle circuit.

The track is nestled between to the Hunter Valley Vineyard region and Lake Macquarie – the Southern Hemisphere’s largest coastal salt water lake.

It formed the opening round of the Championship last year when unprecedented temperatures descended on the Newcastle region – it hit 49°C (120.2°F) ambient throughout each day of competition. This time around, as the region heads towards winter, temperatures are expected to be between 5°C (41°F) and 21°C (70°F).

Live timing from Friday can be followed at www.speedhive.mylaps.com, with livestream and all the information required for the event at www.karting.net.au.