Heading into last season, Jamie Bricknell was without a 410 Sprintcar ride. However, that all changed in the middle of the season thanks to an offer from fellow racer Tony Clasener, and their partnership is going to continue for the upcoming 2020-21 season. 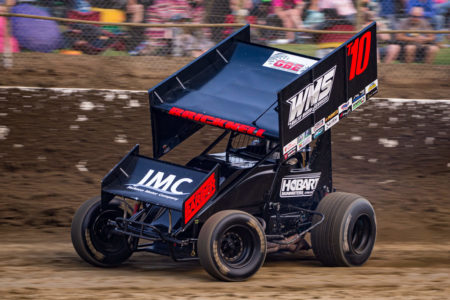 While the Launceston-based Bricknell was sitting on the sidelines for the first half of the season, the Hobart-based Clasener reached out to him and offered him a ride, and it all snowballed from there. Bricknell jumped into Clasener’s spare car, which was the Tas # 10 Walsh Marine Services supported Triple X, and in their half-a-dozen race meetings together they picked up some impressive results.

The results during those handful of race meetings with Clasener saw Bricknell came away with a top-10 finish in the Australian Championship at Latrobe Speedway, a second-place finish in the Tasmanian Title, and a feature-race victory at Clasener’s home track, Hobart Speedway.

To say that the Bricknell and Clasener partnership exceeded expectations would be quite the understatement.

“I was sitting on the sidelines without a ride, so when Tony (Clasener) approached me, I made some enquiries to a few people that I know as we didn’t really know each other, and then a deal was done,” explained Bricknell, who is a three-time Tasmanian 410 Sprintcar Champion.

“Last season, Tony and I didn’t really set any big expectations, other than to focus on running the Australian Championship on home soil, and it all went from there.

“The main reason Tony and I so far have worked well together is although we want to do well, we want to make sure that we are all having a good time in the process.”

Clasener never thought that he would have one let alone two 410 Sprintcars, but last season that was how it all worked out.

“After buying the second Sprintcar to part out and with the Australian Championship being held in Tasmania, the idea of putting someone in the car for the event came up,” he explained.

“I didn’t even really know Jamie (Bricknell) that well, but in the past he always offered to help me out at the track and make time for me to give advice, so it was a pretty easy decision to ask him.

“Having Jamie around while I was racing to give advice and help me understand what the car does on the track and why has been a massive help for my own Sprintcar racing.”

Looking ahead to the upcoming season, Bricknell is pleased to be running the full season with the Clasener team, which may include a trip to the mainland to contest the Grand Annual Classic at Warrnambool’s Premier Speedway in Victoria.

“At this stage, I’m planning to do the full season in Tasmania and try and run up at the front of the field on a regular basis,” enthused the 30-year-old racer.

“I’m really looking forward to getting a full season in and Tony feels the same way, and we might even explore the possibilities of venturing over to the mainland, but we will just have to wait and see at this stage.”

Special Thanks: Ash Cleary (crew chief), Steve and Margy Bricknell, Neville Young, Dwayne Clifford, Leon and Tyler Cleary and Ashley Walsh, along with all their supportive family and friends.

To find out more about Bricknell and Clasener, LIKE them on Facebook by searching Bricknell Motorsport or The Barber Shop (Moonah).