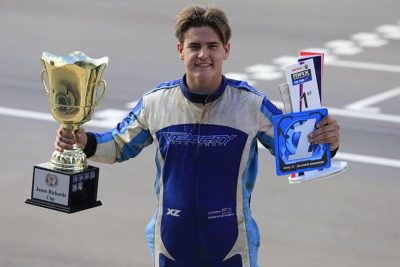 It was the first time that Brewczynski had driven the two speed, direct drive category and continued the good form of the American manufactured COMPKART chassis in DD2.

It was a double celebration for COMPKART Australia with Kris Walton taking out the DD2 Masters for drivers over 32 years of age and securing second in the Series, while his son Max finished second in Micro Max.

The win adds to Sydney-sider Brewczynski’s efforts in the TaG 125 category in the SP Tools Australian Kart Championship. He was in contention throughout the season and took victory in the final round, amassing enough points to become Champion, however a body work infringement dropped him down the order post race, relegating him to second in the Series.

Brewczynski’s eyes now turn to the Race of Stars on the Gold Coast, where he will aim to continue his success in Rotax DD2, which he will twin with a campaign in TaG 125. Should he win the DD2 race at the Race of Stars, he will earn the final place on the Australian team for the Rotax Max Grand Final Challenge to be held in Brazil, starting in the last week of November.

“It was a great way to kick things off in DD2, you can’t ask for much more than a win,” said Brewczynski. “For it to be the Jason Richards Cup is pretty special too. I watched Jason as a kid race and he always had a great attitude towards his racing, so to win that Cup is pretty cool.

“My focus is now on heading to the Gold Coast for the Race of Stars and the DD2 category there and try to represent my country once again at one of the biggest karting events in the world.”

Following a win at the Supernats in Las Vegas, the 16-year-old is now domiciled in Texas and competing in the ever-growing American F4 Series.

The Velocity Kart Shop COMPKART team will be next in action at the Race of Stars on the Gold Coast in the middle of October.