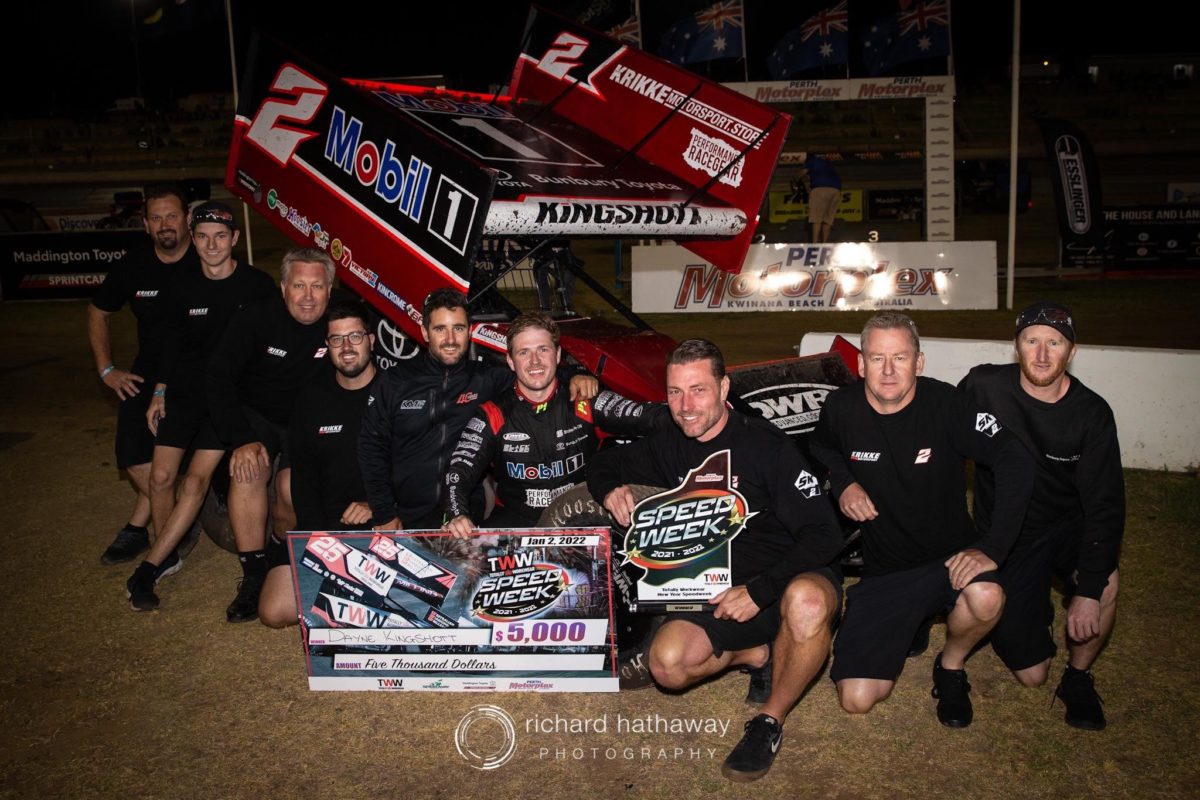 The second season for Dayne Kingshott and the Krikke Motorsport team together has just been run and won and the highlight to come out their 2021-22 season campaign was without a doubt their breakthrough win.

For Kingshott and the Krikke Motorsport team, January 2 of this year at the Perth Motorplex was a special and emotion-charged occasion, when they romped to their first feature-race win together and Dayne’s first 410 Sprintcar victory during the eighth Maddington Toyota Series round.

“There were numerous highlights to come out of the season just gone, with the main one being our first feature-race win together, and we really grew more as a team and our performances reflected that,” commented Krikke Motorsport team driver Dayne Kingshott.

“During the season we had a few unlucky breaks in feature races while in strong positions, which denied us of a better chance of challenging for the Maddington Toyota Series crown, but overall, we had shown consistent speed every night and we had qualified up the front in all of our feature races.”

“I simply couldn’t be prouder of Dayne and the team,” he expressed.

“This season was a lot tougher here in Western Australia compared to last season. The competition went up to a whole new level this season, as it was deeper across the board with more different winners than last season. I thought Dayne did a great job in and out of the car and improved out of sight as the season progressed.

“Matty (Cochrane, crew chief) and the boys did an excellent job turning out a fast, meticulously prepared hot rod all season. We never had any mechanical issues whatsoever which is a testament to the guys. And on top of that, we’ve probably never had more fun going racing.”

Looking ahead to the 2022-23 season, the Krikke Motorsport team are currently working on their schedule and overall plans.

“I guess the big question now is what do we do next season now that the state borders are open?” Krikke remarked.

“That’s yet to be seen, but we have some pretty exciting plans on the table that include hitting the road again, if warranted, as well as continuing with Dayne. I feel like we are only just starting to see Dayne’s potential, and I think next season he will be a real contender night in night out. It’s exciting times ahead for sure!”

In total, Kingshott and the Krikke Motorsport team collected five podium finishes during their 2021-22 season campaign, which included one win, one second place, and three third-place finishes. They had finished third in their final appearance of the season recently that saw them pick up the Perth Motorplex Track Championship win and secure third in the final Maddington Toyota Series point standings.

The Krikke Motorsport team would like to thank their 2021-22 season supporters: