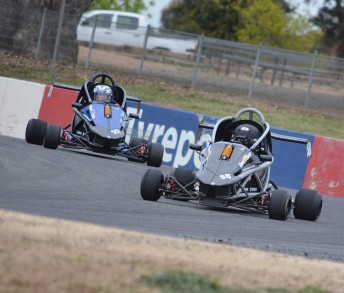 Armstrong on his way to victory

MEDIA RELEASE – Australian Hyper Racer Championship – It’s taken him three years, but Wayne Armstrong finally knocked off the big boys at the second round of the 2015 Hyper Racer Australian Championship at Winton Raceway, to cement his place as a serious title contender.

It was a close thing though, with reigning champion Dean Crooke only 8/100ths back in second and Daryl Steel 0.2s back in third.

Challenging track conditions greeted the drivers, with tarmac contractors having recently laid down new patches of bitumen in the sweeper and at turns 10 and 11.

The transition from minimum grip on corner entry, to mega grip mid corner as the drivers crossed the new surface, before exiting on the slippery old surface, required new innovative cornering techniques which lead to some spectacular car control antics.

Drivers who had the pleasure of being close behind a colleague, were treated to a carnival of action.

After two rounds, Dean Crooke leads the four round series, with Armstrong in second and Jon Crooke a close third.