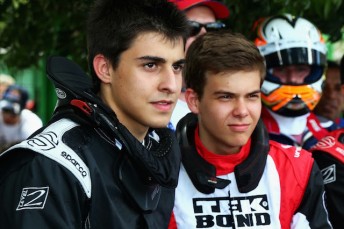 MEDIA RELEASE: Cousins Bruno and Rodrigo Baptista will bring a strong Brazilian influence to this summer’s Toyota Racing Series which starts at Ruapuna Park, Christchurch on January 16 and 17.

The pair are joining fellow Brazilian Pedro Piquet to contest the five round, 15 race championship which culminates with the New Zealand Grand Prix at Manfeild on February 13 and 14.

With three drivers in the field, Brazil could have the strongest national representation in the series.

This year the Sao Paulo driver has raced in Formula Renault in Europe contesting some rounds of the Northern European, Alps and the main Eurocup series

At the start of the year Bruno combined with cousin Rodrigo to win the GT class of the Fara Endurance Championship at the Homestead-Miami Speedway, Florida in an Aston Martin GT4.

Rodrigo has just finished the Brazilian Formula 3 Championship, where he has finished fourth overall, but was one of only two other drivers to beat Pedro Piquet who won 12 of the 14 rounds, throughout the whole season.

Rodrigo also had two runners-up and a third placing in races on his way to fourth.

He will race with the Auckland based ETEC (European Technique) team, while Bruno’s car will be prepared by the Victory Motor Racing Team from Nelson.

The full TRS schedule is: