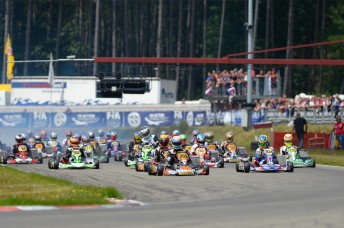 The start of the Final at the opening European KZ2 championship round at Genk in Belgium last month with eventual winner Andrea Dale (CRG/Maxter/Bridgestone #369) leading the way. Pic: Fast Company/CIK-FIA

Kiwi karter Daniel Bray is keen to move forward at the second round of this year’s CIK-FIA European KZ2 Championship at Wackersdorf in southern Germany this weekend.

The 27-year-old from Auckland, a works driver for Italy’s GP Karts team, finished 15th at the first round of the 2014 series in Belgium last month – but would have been further up the finishing order if he hadn’t been punted off the track while disputing seventh position early in the Pre-Final, only just making the Final with the last transfer spot (P17).

Earlier in the event the former US S1 Pro class champion who finished third in the KZ2 Cup race in France late last year, had claimed three top six finishes across the four qualifying heats and was being touted as a podium contender.

The podium is where Bray himself wants to be this weekend, though he is realistic as far as the competition is concerned.

“Even since the World Cup last year there are more guys up there, but, you know, I showed last year I could run at the front so that, obviously, is where I want to be again this weekend.”

The KZ2 class races at the first round of this year’s European championship were dominated by Andrea Dale (CRG/Maxter/Bridgestone), the Italian winning all the heats then his Pre-Final and the Final.

The 13-year-old, the reigning New Zealand Rotax Max Junior class Sprint champion, flew out earlier this week and will test this weekend at the Zuera track in Spain with his English-based team ahead of the third round of this year’s Rotax Max Euro Challenge there next week and weekend (July 14 & 20).