Bramich ready to make a break in Australian Supersport 300

Bramich ready to make a break in Australian Supersport 300 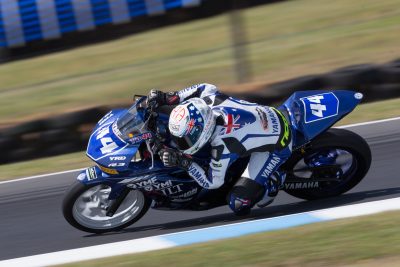 Tom Bramich (YRT,Yamaha YZF-R3) is the rider to chase in what has been an extremely competitive Australian Supersport 300 class to this point, and as the Yamaha Motor Finance Australian Superbike Championship presented by Motul Pirelli (ASBK) heads up to Hidden Valley Raceway, Darwin, this weekend Bramich knows the paddock is hot on his heels.

Bramich comes into Round 4 with some serious racing form, claiming two of the three race wins at Round 3 The Bend Motorsport Park, missing the perfect weekend by the smallest of margins. Bramich had been consistent this season with a second overall at Round 1 at Phillip Island and then third overall at Wakefield Park Raceway.

It has been a great start to 2018 for Bramich who joined the bLU cRU 300 Racing Team this season; “So far it has gone fairly well, we’ve scored good points in the rounds so far and avoided any DNF’s to this stage. We made a big point out of being consistent this year and the first three rounds we have showed that and with that we come away with some good points. The competition is so close in this class, so I have to be on my game and ready to go in Darwin.”

In a class full of talent, and a grid where the winner can come from anywhere. Bramich admits it has been mentally tough to prepare for each race, knowing it will come down to the last lap, and you can finish in eighth but be under a second off the win.

“It can be tough mentally but once you accept that it’s going to be eight of you battling for the top three positions and you have to accept that you’re not going to pull away and you have to battle till the last lap, it’s great. You must go into every race knowing that it’s going to be close, so there’s not much you can do about it because everyone has their strengths and weaknesses and with these bikes it’s easy to use the slipstream to get back into the fight.”

To add to the complexity of the class, Bramich’s is joined at the front of the field by his bLU cRU 300 Racing Team teammates Hunter Ford (YRD, Yamaha YZF-R3) and Zac Levy (Puma RV’s, Yamaha YZF-R3).

“The team is great, and the atmosphere has been something I have really enjoyed thus far, but when it comes to out on the track everyone wants the best for themselves. We don’t really chat much about set up or tactics because I think it’s too early in the season for those kinds of discussion. But we still chat, we’re all friendly, we get along really well. We enjoy each other’s company but in terms of in-depth analysis of races we have our own teams around us for that kind of thing.”

As ASBK heads to Darwin, Bramich has a great sense of confidence after picking up the lap record during his last appearance at Hidden Valley Raceway and feels he can build on that this year.

“I really enjoy the whole aspect of racing in Darwin – the atmosphere, the track, the climate, everything like that – so I’m really looking forward to racing again this year. Last year I felt strong, I got the lap record there and I had a good result there, so we’re looking to build on that and hopefully come out with another strong result. But as always in Supersport 300 you plan on winning but anyone of us on the grid could win,” finished Bramich.

Grab your tickets for Round 4 here and if you can’t make it to Darwin, don’t forget you can catch all the action live on SBS, Fox Sports and via the ASBK livestream at asbk.com.au and on ASBK’s Facebook.