The brains trust behind the quickest and fastest blown door car

The brains trust behind the quickest and fastest blown door car 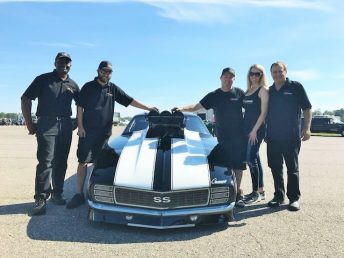 Noonan formed a three race deal with Australian Doorslammer Legend – John Zappia to pilot their PDRA Pro Extreme Jerry Bickel 1969 Camaro with the PDRA World Finals being the last of the three races.

Noonan’s USA General Manager, and fuel management extraordinaire Darrell Makins, assisted by USA based Noonan Engineer- Lee White, along with Jamie Noonan and John Zappia, formed the multicultural brains trust that led to yesterday’s success along with support help from the Zappia Racing Team. The collective skill, experience and credibility, came together to form a record-setting team.

“We had a game plan for this three race deal and we are ecstatic to see it pay off. To lay down a world record 5.42 @ 265.33 mph on our first full quarter mile pass certainly proves the engine is on point with where we thought it should be and for John to head back to Australia tomorrow as the world’s quickest and fastest blown door car driver, we’re thrilled for him, the entire Zappia racing team and for all of our fans” said Jamie Noonan, CEO. “Our efforts now will be geared back on the business, continuing to improve our internal processes and both on and off track customer relations, along with the introduction of new services to underpin our business model going forward”.

Noonan Ultimate Race Engineering is one of Australia’s premier race engine building and development facilities and a world leader in billet component innovation and boasts a growing presence in the US market. Their track-proven products were utilized in 2016 during the NHRA Top Alcohol championship-winning efforts of Joey Severance and Jonnie Lindberg, and by 10-time Australian Top Doorslammer Legend – John Zappia.