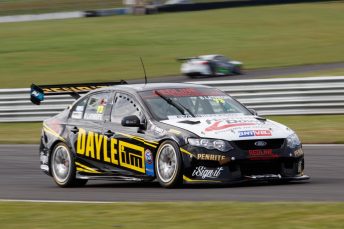 The second round of the BNT V8s at Bruce McLaren Motorsport Park in Taupō will be one Brad Lathrope won’t want to lament on for too long.

After the mechanical gremlins at the start of round one and a race ending collision by the end of it, Lathrope came to Taupō with consistency on his mind. He achieved just that, finishing every single session in sixth place.

The start of the weekend began badly for Lathrope. The strain gauge on Lathrope’s gear lever snapped on just his third flying lap of the 3.5km circuit. With each BNT V8 round limited to just two days, the team opted not to change the gearbox as they saw little to gain.

“I don’t know whether I ate too many weetbix or worked out at the gym a bit too much this week, but unfortunately the strain gauge for the flat shift on the gear lever decided to snap off halfway through practice,” Lathrope said.

“We decided not to replace it and just run the rest of the weekend just clutching on up-shifts. We still have a lot of time to find getting up to the front guys, but it wasn’t the end of the world.”

For qualifying and the remaining three races Lathrope was forced to drive without the flat shift cut. With hopes of being near the pace of the front runners it was an annoyance the team didn’t want to have to deal with having come to Taupō.

Lathrope said he’s still getting to grips with the car, something he said will probably take him the duration of the season to get used to before he can be challenging for the podium regularly.

“I’m still just trying to understand how to drive the car because you can’t drive it like you drive a Class Two car.

“With the old Class Two Ford Falcon you can use the throttle to be able to drive yourself around the corner or get the car to pivot so to speak. Whereas with the Class One car you have to hit the brakes, get your maximum turn in, just be very very patient and hit the apex of the corner.

“It’s not until you’ve started to straighten up the steering wheel you can really start to feed it the full throttle and actually start getting some power on the ground.”

Lathrope said he needs to work on his own driving style and is too often getting oversteer as he tried to understand the driving style of the Class One car.

The next round of the BNT V8s takes place at Mike Pero Motorsport Park in Christchurch on January 13-14.