Matt Brabham has had to work overtime to take a pair of top-five finishes in the Pirelli GT4 America Sprint round at Sonoma, California after a starting procedure violation put him to the back of the grid in race one this weekend. 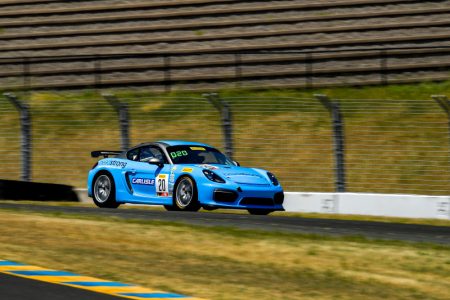 The 25-year-old made his second appearance of the year behind the wheel of the CRP Racing Porsche Cayman GT4 CS-MR.

The 2016 Indy 500 starter finished second quickest in the combined practice session on Friday, but was fastest of the Sprint competitors. It was an impressive effort from Brabham and the team who were running the older specification Porsche Cayman.

Brabham converted his practice pace to fourth in qualifying, with excellent prospects for the race.

However, the CRP Racing team were deemed to have been late to the pre-grid in the paddock and Brabham was relegated to the rear of the grid for the race start.

The 2018 Stadium SUPER Trucks champion had a fire under him as the field went green and had moved from 21st to 10th before the Safety Car came at the 10-minute mark.

Brabham held his own in the Cayman, slicing through the field to eventually finish fifth while genuinely having the pace to fight for a podium in the final laps.

The second race of the weekend saw Brabham start from ninth – with the grid decided by competitor’s fastest laps in the first race.

Brabham was able to escape damage in the opening lap after a coming together with two other cars.

It was another stellar drive from Brabham who fought his way through to finish fourth and lamented finishing just off the podium despite having the pace to challenge for third in the late stages.

This weekend’s results come on the back of his debut in the series at Long Beach where he finished in eighth, while performing double duties with Stadium SUPER Trucks.

Brabham currently leads the Stadium SUPER Trucks series after taking a win and a second place in Long Beach.

The Australian-American will return to the streets of Toronto with the Stadium SUPER trucks series as they support IndyCar in their fourth round of 2019 (July 14th-15th). Brabham made his debut in the series after a late call up in Toronto in 2015.

What Matt had to say…

“We had a good practice, we finished up on top and then we qualified fourth, which was relatively good. We were really looking forward to the race it was just unfortunate how it played out,” said Brabham.

“We then had to start from the back which was frustrating, but I was definitely motivated to get through the field. I just made my way through and made some really good passes.

“We had a really good race but it was frustrating because I was catching the two guys in front really fast and I just ran out of laps. We were definitely quick enough to run in the top three.

“I got a pretty good start in the second race, unfortunately someone tried to spear-bomb me down the inside and got on the grass and lost it and then came back into my car. With that I was pushed into the car next to me. Luckily, I was able to get out of the way a little and I didn’t get that much damage, the steering was a bit off but we escaped relatively cleanly.

“After the yellow in that race I was able to get all the way up to fourth and was catching third like crazy. I came from way back and caught him and almost got around him as we came to the chequered flag. If I had a couple more laps I could have gotten it done.

“I have to thank Dave Roberts, Carlisle and Headstrong for getting the opportunity to be here this weekend. It’s awesome to be racing with Nick Short and CRP Racing.”