Heading into last weekend’s Australian RSA Street Stockers Title at Gilgandra Speedway in the central western of NSW, Josh Boyd wasn’t considered as one of the leading contenders; however, that didn’t stop him from upsetting the form guide and coming away with the win. 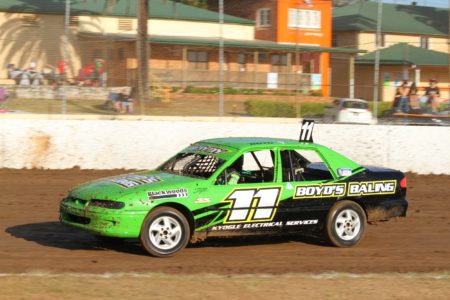 With less than half a dozen RSA Street Stockers race meetings to his name since stepping into the class at the beginning of the season, the 18-year-old racer from Casino in Northern NSW flew under the radar throughout much of the event, but the NSW # 11 Boyd’s Baling supported VR Holden Commodore racer came through with the goods in the Australian Title deciding feature race.

Qualifying for the feature race as the third highest point scorer after a fourth, second and a win from his three heat races, Boyd’s confidence grew throughout the night and he enjoyed an outstanding run during the entire 25-lap distance. From the drop of the green flag, he moved into second on lap 10 and then four laps he took control of the lead away from former Australian Champion Shane Carlson. Once out in front, Boyd was able to sustain the pressure from his rivals along with multiple stoppages in the second half and go on to take out an impressive win.

“It’s an amazing feeling to win the Australian Title after such a short space of time in the class, and I’m also thrilled to be able to share this experience with my family and all of my sponsors,” commented Boyd, whose only previous visit to the Gilgandra Speedway track was three seasons ago in a RSA Junior Sedan.

“In the lead up to the Australian Title, I didn’t set my expectations too high, as I was just wanting to gain more experience. However, as the night went on, the more I had to change my way of thinking, as I went from just wanting to make the feature race to thinking about trying to challenge for the win once I had qualified so high up in the feature race.”

Prior to stepping into the RSA Street Stockers class, Boyd had spent the past three seasons in RSA Junior Sedans, where he not only took out the Australian Title spoils but also the NSW Title at Gunnedah Speedway.

After graduating out of RSA Junior Sedans at the end of last season, Boyd and his family made the decision to move into the RSA Street Stockers class. They purchased a VR Holden Commodore from fellow local Robbie Duncan. With the purchase of the Duncan car with its live rear axle setup brought a few doubters but the Boyd family have taken to the car well and this upset Australian Title victory is certainly proof of that.

For Boyd, the plans for the rest of the season is to contest the remaining race meetings at his home track of Lismore Speedway and hopefully being able to contest the NSW RSA Street Stockers Title at Nowra Speedway on May 4.

Special thanks: Dad (Trevor), Mum (Karen), Uncle (Darryl), Glenn Armstrong, and every one of the RSA Racing Sedans Australia officials.

To find out more about Boyd and his team, LIKE them on Facebook by searching Boyd Motorsport – #11 Josh Boyd.