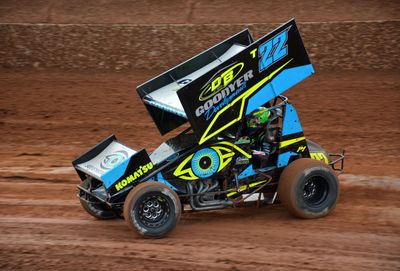 If it is action and excitement you are seeking on Boxing Day, make tracks to Archerfield Speedway for a massive night of motorsport entertainment featuring round five of the East Coast Logistics Sprintcar Track Championship and round five of the TFH Midget Series, plus Monster Trucks, Fireworks, Lightning Sprints and Modlites. Rest assured, no Boxing Day Test Match has ever delivered the level of intensity, drama or exhilaration that emanates from a Sprintcar feature race, so make tracks to Archerfield this Saturday night for your post-Christmas adrenaline rush.

Last weekend saw Lachlan McHugh do it again with another commanding drive to secure his fifth feature race win of the season at Archerfield, once again leaving his rivals in his wake to expand his lead in the track championship chase. It has been a remarkable start to the season for McHugh and his performance last weekend was particularly impressive given he had a lot of work to do in making his way to the front. Ultimately, it was a win secured as much through patience and precision than outright speed or unnecessary risks and that can only serve as an ominous warning to his rivals that the best is still to come. Yet again, Luke Oldfield proved his toughest rival, serving up one of his typically thrilling displays high on the track against the fence. Ultimately his efforts resulted in yet another runner-up result to remain the only driver to have finished on the podium in every Sprintcar feature race at Archerfield so far this season. For the second round in a row, Callum Walker found himself on the podium, this time in third place and, given the domination of this trio in recent outings, it is difficult to predict who might be the one to step up and take the challenge to them.

Cody Maroske does have a feature win to his name, having taken out round one after McHugh crashed out, but he started from pole position last weekend and had no answer when the challenge came and had to settle for fourth spot. Perhaps it is an interstate visitor who holds the best chance of bringing about a change in the pecking order, particularly in light of his performance last Saturday night. In his first meeting for the season, Tasmania’s Jock Goodyer finished fifth to become one of just nine drivers who have secured a top-five result so far this season at Archerfield, a result that suggests he might just be the most likely candidate to disrupt the status quo at the front of the field. Other interstaters in the 31-car field include Victoria’s Todd Moule, South Australia’s Terry Kelly and Lachlan Caunt from New South Wales.

A perusal of the nominations for round five of the TFH Midget Series reveals several drivers amongst the entries who inexplicably missed their state championship event last weekend. Having finished second in the state title final, Darren Vine brings strong form into this weekend, while Charlie Brown looks to have finally shed the misfortunes that have plagued his season so far, surging his way into fifth place in the same event after starting at the back of the field. So often a force at Archerfield, Rusty Whittaker endured a miserable, and somewhat embarrassing, championship campaign that should only serve as motivation to become the first driver to secure multiple feature wins in the 2020/2021 TFH Series.

Two Modlite feature races have been contested at Archerfield so far this season and it should come as no surprise to anybody even remotely familiar with the category that these have been shared by Klinton Hancey and Terry Leerentveld. Both are former national titleholders and they have shared the mantle as the category benchmark for several seasons, with the onus on their opponents to find a way to beat them, something that nobody has ever been able to do with any regularity. Certainly, if there is anybody who has devised a strategy to upstage the big guns, the Boxing Night stage is the perfect place to successfully execute such a plan.

Gates open at 1.00pm for competitors and online ticket holders only, with general admission ticket sales and entry from 3.00pm. Early racing will hit the track from 5.00pm and the main program, which will also feature Lightning Sprints, will get underway from 6.00pm.