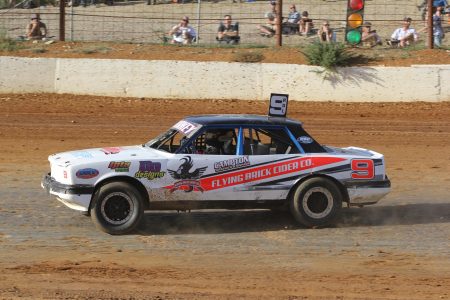 Bourke Motorsport headed to Simpson Speedway in the South West of Victoria for a one of race meeting for the season with a feature race for Sports Sedans being promoted by the local club, Bourke was one of more than a dozen drivers to compete and despite tough competition pushing Leigh Bourke and his little Cortina, Bourke secured the victory by just .366 of a second at the finish line of the main race.

Bourke was able to lead all twenty laps in the feature event to out run a hot Chris Rieck who almost pinched the win, youngster Ricky Cornwall who found himself behind the steering wheel after the car’s owner driver Mick Rizzoli was injured in the pits earlier and Victorian Champion Jamie Paull and Tommy McDonald.

To reach the final Bourke ran three heat race events and won two of the three and started from the prime pole position for the feature race.

In his first heat Bourke finished second to the new Victorian champion Paull by just .378 of a second after starting in fourth position. Bourke was second by lap two and chased the leader for the remaining six laps whilst Rizzoli finished in third spot.

In another close battle, Bourke then finished just .731 in front of Paull in his second heat after again starting in fourth and needing to pass Paull for the lead. It took five laps for Bourke to move into second and until the seventh lap to take the lead and win from Paull and Tommy McDonald.

In the final qualifying race Bourke won in the fastest eight lap time for the evening at 2 minutes 20 seconds defeating Paull again this time by over two seconds with McDonald again in third.

After the win in the feature event Bourke was delighted more so for the class than for his own victory. “Our class is growing, it is the best state based sedan class by far in Victoria and to come to Simpson and impress the club with our display all goes well for next season.
They already want to talk to us for next year. I don’t have much time to reflect on the victory, it is nice to win and Chris gave me a tough fight. I now have to focus on an event I am helping to support at Redline Raceway with my sponsors involved. Well done to everybody here tonight and thank you Simpson Speedway Club.” Shared Bourke.