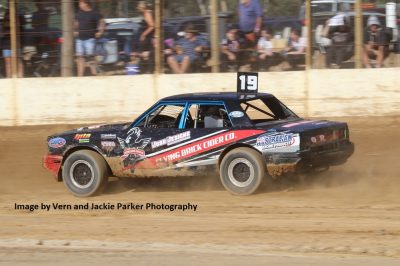 The ‘Flying Brick Cider Co’ Bourke Motorsport Cortina is back in action this coming Saturday night and in a dream pairing for Cortina fans, Leigh Bourke with his 6 Cylinder Modified Cortina is one half of a two Cortina team with David Donegan driving a V8 powered Cortina, and the duo is has its sights to win the big Alexandra Speedway 3 Hour Enduro.

With the official race season finished in June, the Enduro some seasons ago was created to have that one race between the end of one season and the beginning of the next where the original focus was more on the social gathering of dirt track fans just getting together to enjoy a beer and each other’s company, the race though over the years has got faster and faster and the drivers more determined to crack a top five result, Bourke and Donegan will have some fun for sure, however they do want to figure in the top end results.

Bourke in the off season has purchased a Street Stock with focus next year shared amongst Sports Sedan and Street Stock racing and giving his daughter a helping hand to get behind the wheel and go racing at Redline Raceway.

The Enduro has come at a great time as his competitive juices are itching for some action. “We recently took the Street Stock to Redline for some laps, it has only been a handful of weeks since Queens Birthday weekend where we won at Swan Hill and damn, am I keen to get on track at Alexandra.” Shared Bourke.

Next season, Bourke expects to compete in lots of home track Sports Sedan and Street Stock racing, have another crack at the Sports Sedan title, compete in some of the big Street Stock events at Redline and possibly the Australian title if Bourke is happy with the pace he has in his car and be a proud father as he helps his daughter Emmalee develop her skills behind the wheel at the same time.

With thoughts on next week’s race, when asked about the pairing with Donegan Bourke went on to say “Donnaz is a class driver, his results speak for themselves. He is a good bloke too and enjoys himself at track, very much like me. We both love our Cortina’s and the fans want to see the pairing so I asked him and we are ready to go.”

The pairing of Bourke and Donegan on paper suggests a top five result is very much realistic in the Enduro event, it takes a great deal of luck and pace to stay on the lead lap, team work in the pits when changing drivers and preparing cars and strategy as to when to come off track to swap with your team mate is critical.

The Bourke – Donegan Team hopes to join the likes of the great teams so far that have won the event in the Enduro Hall of Fame including two time former winners Paul Turnball/Dehne Sparrow and local teams that include Matt Nelson/Darren Nelson, Lenny Bates/Damien Miller, Darren Nelson/Daniel Unternahrer, Bates/Andrew Jordan and last season’s winners Luke Fallon and Brad Warren.

Bourke Motorsports will be on track next Saturday from 2pm at Alexandra Speedway and look forward to seeing all their friends and supporters for a great event with the Enduro and a huge Crash and Bash car feature.