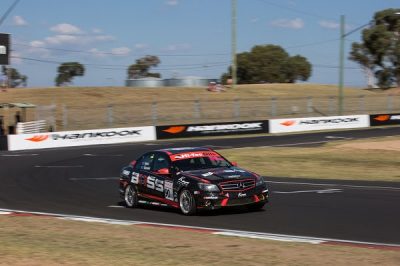 The Boss Surveillance Mercedes AMG C63 has turned plenty of heads with its abundance of straight-line speed – but drivers Justin Anthony and Karl Begg believe their lack of experience at Sandown will balance out any potential car performance advantage in this weekend’s Australian Production Car Series opener.

Anthony and Begg have enjoyed a strong start to the season, following up their Bathurst 6 Hour Class A2 victory with an outright race win in the first round of the Queensland Production Car Series at Queensland Raceway on the weekend – but they have modest expectations for their first visit to the Melbourne circuit.

“On paper, Sandown looks like the sort of track that will suit the Mercedes – our advantage is straight-line performance, and Sandown is a track with long straights connected by slow corners,” Anthony said.

“However, neither Karl nor myself have raced there before, and we’re up against drivers and teams who have done a lot of laps there.

“With the large number of entries this weekend, traffic is going to be a major factor – learning the track will be a challenge, because the practice sessions will have a lot of congestion.”

This weekend’s race format features four one-hour races, each with a compulsory pit stop, and teams have the option of mixing and matching drivers between the races.

“We’re not sure yet how we’ll approach each race,” Begg said.

“There’s no requirement to change drivers during the pit stops, so it could be that the most effective strategy is for Justin and I to do two races each. Staying in the car might turn out to be an advantage because if you swap drivers, the incoming driver will take a lap or so to dial themselves in.”

Both drivers are happy with the performance of the Mercedes in its outings so far.

“Everyone talks about our top-end speed, but we’re pleased with other aspects of our package as well,” Anthony said.

“The brakes are effective, and the reliability has been one of our strengths in these long-distance races.

“Overall, we’re just pleased to have the opportunity to race at Sandown – it’s a historic venue, and will be good experience for us to learn a new track.”