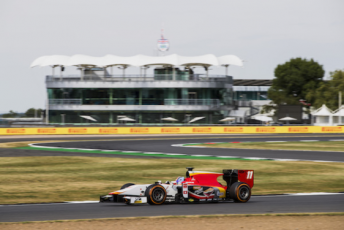 Ralph Boschung produced a gritty performance in the FIA Formula 2 Championship at Silverstone this weekend (13-16 July), as the young Swiss ace fought hard in both races only for Lady Luck to stubbornly refuse to smile upon him at the ‘Home of British Motorsport’.

Boschung travelled to Silverstone in an optimistic mood off the back of three points scores from his last four starts in the fiercely-contested Formula 1 feeder series and having finished on the podium around the legendary Northants circuit two years earlier in the GP3 Series.

Unfortunately, set-up issues during free practice left both Campos Racing drivers languishing towards the wrong end of the order, and those difficulties would carry over into Friday’s qualifying, restricting 19-year-old Boschung to just 16th on the Feature Race grid.

“The set-up was completely out in practice,” he explained. “The car was undriveable – we tried to do a race simulation over five or six laps, but I had to stop as the tyres were completely gone, so something was clearly wrong.

“We looked at the data and the car was oversteering way too much. We corrected this for qualifying and the balance was better, but still we did not have the pace. Neither my team-mate nor I had confidence in the car and we could not push to the limit as we wanted, which was obviously disappointing.”

Electing to begin the Feature Race on Pirelli’s prime tyres, Boschung battled back from a tardy getaway to scythe his way through the field, and by lap five, he was already up to 11th place. As his rivals on the less durable soft-compound tyres peeled into the pits, the 2016 GP3 Series race-winner rose to second, and he lost just one position – to runaway championship leader Charles Leclerc – before pitting himself on lap 21 to switch to the option rubber.

Rejoining the fray in 13th, Boschung overhauled Louis Delétraz and Sérgio Sette Câmara to advance to 11th, which is where he would take the chequered flag. Frustratingly, that was just one spot outside of the points-paying positions – but he was nonetheless justifiably encouraged by another feisty F2 performance.

“It was a good race,” he reflected. “We chose a different strategy to most of the other drivers, beginning on the prime tyres and finishing on the options. I didn’t make a good start and was 19th at the end of the first lap, but after that, I was amongst the fastest in the field – setting the third-quickest lap time – and I was able to manage the prime tyres well. Even Leclerc struggled to close the gap to me after his pit-stop.

“Our strategy was a risk, but it almost worked out and we could have finished tenth if we had stopped one or two laps earlier. We were losing too much time on the primes by the end of the first stint, but overall, it was very positive and I was happy with the result – to climb back to 11th was great.”

In Sunday’s shorter Sprint Race, the Swiss teenager conceded ground early on, but he was still pushing hard in the closing stages when an overtaking attempt on Alexander Albon for 11th at Stowe went wrong. After veering onto the grass at high-speed, his Campos Dallara GP2/11 was sent spearing into the wall on the opposite side of the track, concluding his challenge in disappointing fashion.

“The goal was to finish inside the top ten, and I think that was possible,” Boschung said. “Five laps from the end, my tyres were in better condition than Albon’s and I was a second-a-lap quicker and catching him. On the exit of Becketts, I was right behind him and with DRS available, I had a top speed advantage but I made the wrong choice to go to the right. I went onto the grass and lost the car at 300km/h, which caused me to crash. I am glad I did not collect Alex too.

“The impact was not as hard as I was expecting, but unfortunately, I left my hands on the steering wheel and I hurt my left arm and twisted a muscle. It’s nothing major, but it is quite painful and I will make sure I am back in good shape for the next round in Budapest. The Sprint Races do not seem to want to shine on me at the moment, but I will do everything I can to change this in the future!

“I would like to extend my warmest thanks to Malbuner, the leading meat business in Switzerland, with its newest snack innovation, the Pocket Sandwich, who helped me get this fantastic opportunity, as well as the Valais-based building company CP3 and Patrick Polli, Platinum Fighter Sales, Avanthay Real Estate and B63. I am also extremely grateful to the ‘Club 50’ members for their valuable support.”

The seventh round of the championship takes place at the Hungaroring, Hungary (28-30 July).