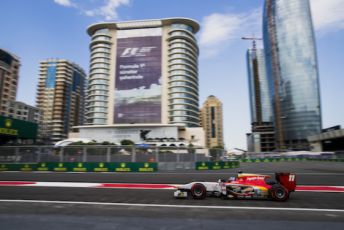 Having come close on several occasions this year, the young Swiss ace was finally rewarded with his and the team’s first points of the season, as Boschung capitalised on a late red flag to finish eighth in the Feature Race, before claiming another eighth place in the Sprint after a rival ahead was disqualified.

Despite a lack of track time due to the virtual safety car and yellow flag periods during practice, Boschung got off to a flying start around the Baku City Circuit and went sixth fastest in Friday morning’s session.

The team changed the 19-year-old’s set-up ahead of qualifying and he could only manage 16th, after struggling to put a clean lap together.

“Like Monaco, I was making my debut at this circuit,” said Boschung. “I was more comfortable to start with, it is a street circuit but you have more time to think than in Monte Carlo.

“Free practice was chaotic and we were only able to do one flying lap. We were quick straight away, which was positive! We went the wrong direction with the set-up in qualifying and I made too many mistakes on my flying lap. 16th was disappointing, but we knew it was a long race ahead.”

Boschung started on the prime tyres, with the majority of the grid going to the softer compounds. The 2016 GP3 Series race-winner managed his tyres early on and led at the halfway stage, as his rivals made their mandatory pit stops.

The team kept the Swiss driver out until the final few laps and Boschung emerged from the pit lane shortly before a red flag halted proceedings. The race would not restart and on count-back the youngster was classified in eighth place, giving him his first points and reverse-grid pole.

“We took the risk with the strategy,” Boschung explained. “We needed some luck towards the end of the race! I was one of just two drivers on this strategy and we knew there was nothing to lose.

“Halfway through the safety car came out, which meant it would be even harder for me to get a good result. Our pace was really strong towards the end of my stint and when I finally pitted, a red flag came out! I was told on the radio that I was eighth. We got lucky, but I’m very happy to score my first points.”

Starting from pole position in the Sprint Race, Boschung was in second by the end of lap one, before being hit by Norman Nato on the run into Turn 2. This dropped him down to fourth, but he was still in contention for a podium.

After five laps, Boschung suffered a DRS failure and was unable to defend down the long 2km straight. Despite this, the Swiss driver picked up another point, after being classified in eighth.

“Starting from pole was a great experience,” Boschung said. “I had a good start and remained in the lead after Turn 1. I focused on keeping it clean and was still second by the end of the first lap.

“Unfortunately, when the DRS was enabled it didn’t work. We had a hydraulic pressure problem and with a 2km straight there’s just no hope! I finished ninth, but inherited eighth after someone ahead was disqualified, which was the best I could have hoped for. We had good pace towards the end and the potential was there for even more points. I’m looking forward to the next one in Austria, where I hope we can improve even more!

“I would like to extend my warmest thanks to Malbuner, the leading meat business in Switzerland, with its newest snack innovation, the Pocket Sandwich, who helped me get this fantastic opportunity, as well as the Valais-based building company CP3 and Patrick Polli, Platinum Fighter Sales, Avanthay Real Estate and B63. I am also extremely grateful to the ‘Club 50’ members for their valuable support.”

The fifth round of the championship takes place at the Red Bull Ring, Austria (7-9 July).