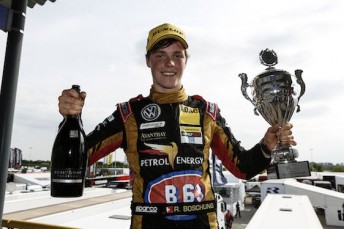 Ralph Boschung made a strong start to his ADAC Formel Masters campaign by securing a podium finish in the 2014 curtain raiser at Motorsport Arena Oschersleben last weekend (April 25-27).

Lining up fourth on Sunday afternoon’s race three reverse-grid, the Swiss made a terrific getaway to draw alongside LOTUS team-mate Dennis Marschall, who unfortunately hit Boschung’s car as the pair entered the first corner and damaged its front suspension.
But the 16-year-old, returning for a second ADAC Formel Masters season, was able to overcome that early setback by brilliantly taking his ill-handling LOTUS to a rostrum finish at the Motopark Academy-run team’s home event, less than three seconds adrift of the winner.
Indeed, that battling performance would help secure LOTUS’ best result of the weekend as Boschung continued to improve after balance issues masked his potential during qualifying.
Ralph had started race one from eighth but was quickly closing on the top three when he was handed a drive-through penalty for a jump-start, ending any chance of a podium finish.
But Boschung would bounce back in style on Sunday morning to secure his first points of the new season. Lining up seventh, he quickly gained two positions and continued to hold fifth courtesy of a controlled drive.
Ralph Boschung: “I’m happy to have secured a podium finish in LOTUS’ home race. However, we struggled with the set-up, particularly in qualifying. To be honest we truly expected to be in a stronger position, especially after winter testing.
“The drive-through penalty prevented me from scoring points in the opener and forced me to adopt a more conservative approach in race two. Then, after sustaining damage in the collision on Sundayafternoon, I lost the chance to fight for victory.
“That said, the entire team worked extremely hard this weekend, with the guys still making changes very late into the night. Everybody here is driven to win and I’ve settled nicely into my new surroundings. The podium gives me a tremendous boost for the rest of the season, and with 21 races still to come anything is possible.
“I would also like to extend my warmest thanks to main partners B63 and PETROL ENERGY who will accompany me throughout the season, as well as Hublot, Avanthay&Partners and Audi.”
Round two of this year’s ADAC Formel Masters takes place at Zandvoort in the Netherlands on May 9-11.