Boost Mobile gets more action as stable of partnerships grows

Boost Mobile gets more action as stable of partnerships grows 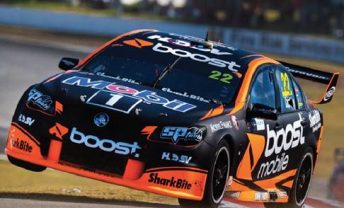 Being held in Sydney this November, the AUS-X Open will bring together the world’s best Supercross and Freestyle Motocross riders as well as live music and entertainment to deliver an action sports-lovers dream event. As an official partner, Boost Mobile will have a strong brand presence at the event while providing unique content and access opportunities to its customers. Two-Time World Champion and Supercross legend Chad Reed will take part in this event, with Boost Mobile branding on his helmet one element of his newly announced ambassadorship.

These announcements continue Boost Mobile’s aggressive push back into the sponsorship and ambassadorship arena. They have also recently signed young surfing prodigy Ethan Ewing and influencer Chloe Chapman while extending its season-long partnership with Mobil 1™ HSV Racing in the V8 series which has also seen V8 Supercars driver James Courtney become a brand ambassador. Such a move sees significant branding on the livery of James Courtney’s #22 car as well as on the front winglets and rear spoiler of Scott Pye’s #2 car.

“We remain youthful by living and breathing the same lifestyle that our brand represents. We have the same passions as our customers and will continue to evolve as they do. You can expect many more announcements about partnerships as we know that our audience loves to experience, watch and share their lives just like our ambassadors, all of whom have great stories to tell,” said Jason Haynes, General Manager, Boost Mobile Australia.

“Content and story-telling is a great way to engage with our audience, and our ambassadors and influencers each have their own authentic connection to their fan base. This provides a great opportunity to let us share what Boost Mobile can offer them and how we can help improve their experience, viewing or sharing. It will ensure we continue to bring the brand to life in an authentic and exuberant way.”

Boost Mobile is confident that such moves will ensure they continue to resonate and standout as an authentic youth-focused brand operating in what is a traditionally conservative telco space, where it offers prepaid plans with 4G services on the Telstra Mobile Network.

“Our focus has to be demonstrating in a real, authentic way that we understand the needs and the aspirations of our consumers, and then working hard to give them more whether it be more data or sharing some amazing experiences. We were the first telco and one of the first major companies in general that embraced action sports as a mainstream marketing platform back in 2000 when it was unheard of to do so, and continue to support and reinvest back into an area of the market that really resonates with our culture and customers.”

“Now in our third successive year running at AUS-X Open, we are proud to have established the largest Supercross, Freestyle Motocross and action sports Event in the Southern Hemisphere and one of the best in the world. We’re continually striving to work with like-minded brands and people who understand our event and connect with our fans so it’s fantastic to have Boost Mobile come on board this year as our Official & Exclusive Telecommunications Partner,” said Ryan Sanderson, Director and Co-Founder of AUS-X Open Sydney.

“They have supported action sports athletes and events for many years, so we couldn’t be happier to have Boost Mobile partner the AUS-X Open. Alongside their ambassador partnership with Aussie Supercross legend – Chad Reed, we can’t wait to collaborate together and give back to Boost Mobile customers and AUS-X Open fans this year!”

Chad Reed is an accomplished Australian Motocross and Supercross racer, competing at an elite level on a global scale for over 16 years. Reed has taken major titles such as the 2016 AUS-X Open Championship, 2009 Australian Supercross Champion and the 2009 AMA Athlete of the Year. With no signs of slowing down, Reed currently competes as a professional Supercross racer for Yamaha factory racing.

Labelled the “Air Apparent of Skateboard World” by the Sydney Morning Herald at just 8 years old, Keegan Palmer has always been destined for skateboarding. Now 14 years old, Palmer is already a skateboard professional having competed in global titles such as the Hurley Australian Open and Bowlarama. Palmer has previously taken titles such as the best under-18 skater in Australia.

Boost Mobile’s first foray back into surfing has seen them sign up-and-coming Australian surfer Ethan Ewing also as a brand ambassador. The reigning World Junior Champion, Ewing turned pro for the 2017 season and currently competes internationally on the World Surf League (WSL) circuit. The 18 year-old from North Stradbroke Island is clearly a name to watch on the global circuit,

Valentino is one of the best young talents in the world of snowboarding. At only 11 years old, he has completed multiple world tours, including the USA nationals in 2016 for which he was awarded Overall US champion, as well as winning 4 gold medals and a silver.

Chloe Chapman, a local from Sydney’s Northern beaches, was a sponsored surfer in her younger years, and has since gone on to start her own clothing brand, Aloé Swimwear.